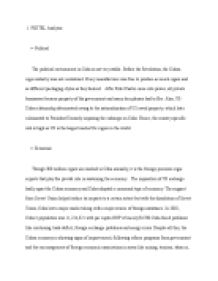 PESTEL and Five Forces Analysis of the Cuban Cigar Industry.

ï»¿1. PESTEL Analysis â¢ Political The political environment in Cuba is not very stable. Before the Revolution, the Cuban cigar industry was not centralized. Every manufacturer was free to produce as much cigars and as different packaging styles as they desired. After Fidel Castro came into power, all private businesses became property of the government and many key players had to flee. Also, US-Cuba relationship deteriorated owing to the nationalization of US owed property, which later culminated to President Kennedy imposing the embargo on Cuba. Hence, the country specific risk is high as US is the largest market for cigars in the world. â¢ Economic Though 300 million cigars are smoked in Cuba annually, it is the foreign premium cigar exports that play the pivotal role in sustaining the economy. The imposition of US embargo badly upset the Cuban economy and Cuba adopted a command type of economy. The support from Soviet Union helped reduce its impacts to a certain extent but with the dissolution of Soviet Union, Cuba lost a major market along with a major source of foreign assistance. In 2002, Cuba’s population was 11,224,321 with per capita GNP of merely $1700.Cuba faced problems like continuing trade deficit, foreign exchange problems and energy crisis. Despite all this, the Cuban economy is showing signs of improvement, following reform programs from government and the encouragement of foreign economic associations in areas like mining, tourism, tobacco, et cetera. Also, Cuba is getting assistance and investment from other countries like Spain and France that accounted for 42% and 33% of the total market share (2000) ...read more.

I would consider this rivalry moderate, and this is a positive aspect if I want to enter in this industry. This is because they don?t have the same competitive advantage of the Cuban cigar industry from the point of view of the brand, knowledge and quality. Cuban cigars still landmark as the benchmark of the superior cigar in the world. * Substitutes : Cigarettes. It?s another positive aspect because they represent the interest of another target of consumer, usually people who loves cigars don?t appreciate cigarettes. The quality and more important the reputation of cigars is deeply different from the one of cigarettes and that?s the reason why there are no relevant substitutes to be considered. * Barriers to entry : Brand identity, government policy, formula/blend, capital requirements, plants. These barriers are considered high. Particularly if we look at the brand.The cigar industry represents not only a cigar production but also the history of a country and a special status symbol of wealth. In addition, the cigar industry is dependent on the quality of tobacco, which cannot be harvested all over the world. Growing and cultivating cigar tobacco requires the soil and climate to keep the humidity on the right level. Therefore, only few countries has the same climate as Cuba?s one to grow tobacco in the most suitable way. Another important barrier is represented by the economy of scale; speaking about that I should say that new entrants in cigar industry must enter in a large scale because, otherwise, they will have to sustain a disadvantage in the costs and a lower profitability. ...read more.

â¢ Number of buyers: The industry has both the domestic as well as foreign buyers. Despite 300 millions cigars being smoked in Cuba annually, the emphasis is on premium export quality cigars as they provide major support to the Cuban economy and the Cuban cigar exports has gradually increased with each year. â¢ Ease of entry and exit: The entry and exit from the Cuban cigar industry does not seem much easy. The production in the premium cigar factories is under the direct control of Cuba’s Union of Tobacco Enterprises. The foreign ownership of land is prohibited. The foreign firms can enter through joint ventures and there are other many regulations under Helm-Burton Act that companies need to comply with, that directly/indirectly make the entry and exit hassle-prone. â¢ Technological changes: The Cuban cigar industry has slowly started incorporating technology in producing cigars. They are investigating new agricultural methods and technologies to improve yields and quality simultaneously. firstly it used to produce handmade cigars but now they use automated machines to produce it. With â¢ Degree of learning and experience curve: The incumbents of the Cuban cigar industry have a high degree of learning and the experience curve is shifting outward as they have been in the business for a long time. â¢ Low cost efficiency and product differentiation: There is high degree of product differentiation as each brand has different blend in the filter, different type of binder and wrapper to finish the product. Also, the companies that have been operating for a long time have been able to achieve economies of scale through improved methods to increase yields and high degree of learning. ...read more.