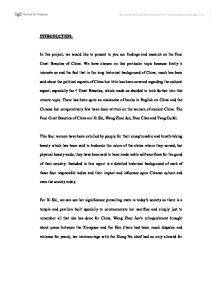 In this project, we would like to present to you our findings and research on the Four Great Beauties of China.

INTRODUCTION: In this project, we would like to present to you our findings and research on the Four Great Beauties of China. We have chosen on this particular topic because firstly it interests us and the fact that in the long historical background of China, much has been said about the political aspects of China but little has been covered regarding the cultural aspect, especially the 4 Great Beauties, which made us decided to look further into this remote topic. There has been quite an avalanche of books in English on China and the Chinese but comparatively few have been written on the women of ancient China. The Four Great Beauties of China are Xi Shi, w**g Zhao Jun, Diao Chan and Yang Guifei. This four women have been extolled by people for their exceptionable and breath-taking beauty which has been said to bedazzle the rulers of the states whom they served, but physical beauty aside, they have been said to have made noble self-sacrifices for the good of their country. Included in this report is a detailed historical background of each of these four respectable ladies and their impact and influence upon Chinese culture and even the society today. For Xi Shi, we can see her significance prevailing even in today's society as there is a temple and pavilion built specially to commemorate her sacrifice and simply just to remember all that she has done for China. w**g Zhao Jun's relinquishment brought about peace between the Xiongnus and the Han (there had been much disputes and violence for years), her intermarriage with the Xiong Nu chief had no only allowed for cordial relations to be forged ever since but also for technology to be inter-exchanged between the two states. She has since then been known far and wide as a political bride. There was also Diao Chan who was also used by the court to sow discord between father Dong Zhuo and son, Lu Bu, to eliminate these two evil men from causing further unhappiness and hardship to the people. ...read more.

It was said that when she was dancing near a bunch of peony, the peony also danced with her. Therefore she was also known as "Goddess of Peony(????)". Diao Chan is most widely known to be a singing girl from the household of Prime Minister w**g Yun in the Romance of Three Kingdoms�????�. The events of this tale took place during Dong Zhuo(??)'s monopolisation of power. One day, during a palace banquet, Dong Zhuo levelled false accusations against Si-Kong(??) Zhangwen(??), an official. All the eminent officials who had gathered for the feast watched in horror as Si-Kong Zhangwen was dragged outside to be beheaded. Each man feared that the fate of the Han duke might well be his own. Diao Chan lived during the later eastern Han Period. She was born in the southern part of China. Her father died when she was young. It was said that her mother took her to Si-tu (??) w**g Yun's (??) residence after her father passed away. She specialized in the making of "Chan Tou Guan (???)", thus the name "Diao Chan (??)". When w**g Yun returned to his residence, he was so disturbed by what he had seen at the palace that he was unable to sleep. He went for a stroll in the garden. Suddenly, he heard someone praying. The sound seemed to have come from behind a clump of peony trees. Stepping over to investigate, w**g Yun realised that it was Diao Chan, a singing girl from his own household. Diao Chan had come to the w**g mansion as a young child and w**g Yun had looked upon her almost as if she were his own daughter. He asked her: "What are you doing here in the middle of the night?" She answered him: "From early childhood, I have benefited from your kindness and have often wondered how I may one day repay you. ...read more.

Nevertheless, the stories of the four beauties were very famous and many of them were transformed into Chinese drama at that time. As Chinese drama might be the best entertainment for folks and gradually the stories of these four beauties became well known. Therefore we strongly believe that it was from then on the term "Four Beauties" began to appear. DEFINE BEAUTY IN CHINESE CONCEPT: Beauty is a state not a phenomenon; in Chinese sayings, it should comprise innate beauty as well. Yang Yuhuan does not possess enough qualities to be called as 'beauty'. As compared to the other three great beauties, she lacked the quality of self-sacrificial spirit. Xishi, w**g Zhaojun, and Diao Chan made contributions to their country when they sacrificed their own interests to leave for another country in the hope of saving and protecting their own. It is not surprising that the Tang emperor Xuanzong fell in love with the "imperial concubine" Yang Guifei. Beauty was the only asset Yang Yuhuan had. A famous Tang poet, Bai Juyi, said, " If she but turned her head and smiled, then were cast a hundred spells, and the powder and paint of the Six Palaces faded into nothing." If Yang Yuhuan had limited her activities to fashion and dancing, no one would have criticized her. But she used her influence over the emperor to have her friends and relatives given important jobs. Her hold over the emperor caused him to give increasing power to her family and to become increasingly involved in the decadence of the court. Due to the suffering of the populace and the growing influence of the Yang clan, a famous general, An Lu Shan, led a revolt. Finally, the rebellion resulted and Yang Guifei was killed. In comparison, Yang Yuhuan did not possess all aspects of beauty. Although she was not entirely to blame for the downfall of the Tang, she never did make an effort to exert constructive influence for her country. ...read more.