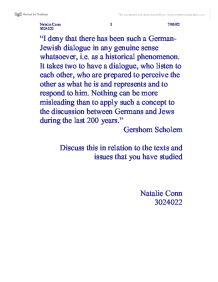 &quot;Nothing can be more misleading than to apply such a concept to the discussion between Germans and Jews during the last 200 years.&quot; - Gershom Scholem. Discuss this in relation to the texts and issues that you have studied.

"I deny that there has been such a German-Jewish dialogue in any genuine sense whatsoever, i.e. as a historical phenomenon. It takes two to have a dialogue, who listen to each other, who are prepared to perceive the other as what he is and represents and to respond to him. Nothing can be more misleading than to apply such a concept to the discussion between Germans and Jews during the last 200 years." Gershom Scholem Discuss this in relation to the texts and issues that you have studied Natalie Conn 3024022 The age of emancipation in Germany began in 1871 with the famous treatise by the Prussian state councilor Christian Wilhelm Dohm. It ended only with the constitution of the German Reich of 1871, which definitively declared the equal status of the Jews of Germany before the law. The age of emancipation simultaneously marked the epoch of the rise of bourgeois society in Germany, and both processes were interwoven. Many German-Jewish theorists claim there was a Judeo-German Symbiosis, which is the illusory interaction or exchange between German and Jewish cultures once the Jews of Germany were emancipated. Underneath this image of a symbiosis, there was another much darker image surfacing on top of it. This was the picture of a growing tension between the Jews and the Germans and furthermore, a failed relationship that would merely end up in devastating conflict. Gershom Scholem, in his writings emphasised the latter idea of an illusionary symbiosis. This is portrayed very powerful in the essay quote. ...read more.

Whether consciously or not, assimilated Jews inhabited a no-mans land. Gershom Scholem furthermore denies the very existence of a Judeo-German dialogue, which in his view "died at its very start and never took place since the Jews were always perceived as foreign elements in the German nation and in spite of their desire for assimilation (like his farther), at no time were successful in integrating with it." (The Jews and Germany, pp 15) He perceived that once the notion of an identifiable 'Jewish whole' had been abandoned, this being the only possible premise for a dialogue, the encounter of the Jews with German culture, in fact, became a form of self denial and monologue: "I deny that there has ever been such as German-Jewish dialogue in any genuine sense whatsoever, it takes 2 to have a dialogue, who listen to each other, who are prepared to perceive the other as what he is and represents, and to respond to him. Nothing can be more misleading than to apply such as concept to the discussions between Germans and Jews during the last 200 years". (The Jews and Germany, pp 6) Scholem and his forerunners such as Heinrich Mann were convinced that the Jews only talked to themselves even when they though that they were talking to the Germans. The idea of a Judeo-German symbiosis was completely denied by them. It is evident that Scholem and his forerunners have completely disregarded the latter facts that Jews and Germans individually did had civil and friendly relations such as Arthur Schnitzler who had many German friends and counterparts. ...read more.

"It is impossible for us to remain strangers, detached from the intellectual and spiritual life of those peoples who permit us to share in it, detached also in out innermost being from what we are trying to contribute, by way of compensation for having been permitted to take part in it. What we receive, as Jews we have no right to receive; what we accomplish, we ought not to as Jews. And yet, unity of spirit compels us to establish what are of necessity specific relations between our Judaism and that which we receive or achieve; and even if our actions were submitted to the judgment of the peoples, even if they felt obliged to tell us whether they accepted or rejected them, their jurisdiction would extend no further, we are the sole judges of any attempt to understand the world on the basis of Judaism itself". (The Jews and Germany, pp 39) It is evident from Jewish writers such as Rosenzweig and Gershom Scholem that 'the Jews' as one people always remained outsiders in the Germanic world. Hence this proves that this Jewish idea of Judeo-German Symbiosis was merely an illusion. However it is just as important to understand that although, as a bigger picture, the symbiosis was never really there at all, there were many German-Jewish relationships, even friendships that did exist. After all, when the Holocaust emerged, many Jewish Germans were saved by righteous, Christian Germans as they allowed them to hide in their houses. This suggests that there must have been, if only a few, German-Jewish bonds and friendships. ...read more.