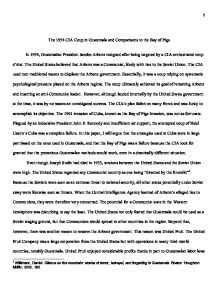 The 1954 CIA Coup in Guatemala and Comparisons to the Bay of Pigs In 1954, Guatemalan President Jacobo Arbenz resigned after being targeted by a CIA-orchestrated coup d'�tat. The United States believed that Arbenz was a Communist, likely with ties to the Soviet Union. The CIA used non-traditional means to displace the Arbenz government. Essentially, it was a coup relying on systematic psychological pressure placed on the Arbenz regime. The coup ultimately achieved its goal of removing Arbenz and inserting an anti-Communist leader. However, although lauded internally by the United States government at the time, it was by no means an unmitigated success. The CIA's plan failed on many fronts and was lucky to accomplish its objective. The 1961 invasion of Cuba, known as the Bay of Pigs Invasion, was not as fortunate. Plagued by an indecisive President John F. Kennedy and insufficient air support, the attempted coup of Fidel Castro's Cuba was a complete failure. In this paper, I will argue that the strategies used in Cuba were in large part based on the ones used in Guatemala, and that the Bay of Pigs was a failure because the CIA took for granted that the precarious Guatemalan methods would work, even in a drastically different situation. Even though Joseph Stalin had died in 1953, tensions between the United States and the Soviet Union were high. The United States regarded any Communist country as one being "directed by the Kremlin"1. ...read more.

Radio use was the final, and perhaps most important, method of psychological warfare waged on Guatemala. Guatemalans received most, if not all, their news from the radio, because much of the country was illiterate. The CIA set up a radio transmitter in Honduras, beaming into Guatemala, and broadcast a radio station they called La Voz de la Liberacion. The radio station had Guatemalan announcers even though it was run by the CIA and in fact recorded in Florida.14 The station ran constant anti-government propaganda, while at the same time announcing that the strength of rebel forces was stronger than ever. It had an enormous effect on the perceived strength of the rebel cause. In June, Castillo Armas's forces finally invaded. The already low number of troops were divided even further to appear as though several different fronts were attacking, increasing confusion and fear. The rebel forces were beaten back on several occasions, and in reality Castillo Armas and his military was losing rather badly. However, the CIA did not hinge the success of the mission on the rebel groups. The "air attack was so crucial" to the mission that when Guatemalan antiaircraft artillery succeeded in shooting down several of the planes, Eisenhower agreed to send more even though it risked revealing the United States' role in the coup. The importance of aircraft would be one of many things mirrored in the Bay of Pigs Invasion several years later. ...read more.