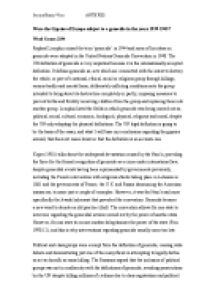 ﻿Jessica Harris-Voss ANTH7002 Were the Gypsies of Europe subject to a genocide in the years 1939-1945? Word Count: 2194 Raphael Lempkin coined the term ?genocide? in 1944 and some of his ideas on genocide were adopted in the United Nations Genocide Convention in 1948. The UN definition of genocide is very important because it is the internationally accepted definition. It defines genocide as; acts which are committed with the intent to destroy the whole, or part of a national, ethical, racial or religious group through killings, serious bodily and mental harm, deliberately inflicting conditions onto the group intended to bring about its destruction completely or partly, imposing measures to prevent births and forcibly removing children from the group and replacing them into another group. Lempkin listed the fields in which genocide was being carried out as; political, social, cultural, economic, biological, physical, religious and moral, despite the UN only adopting the physical definitions. The UN legal definition is going to be the basis of the essay, and what I will base my conclusions regarding the gypsies around, that does not mean however that the definition is an accurate one. Kuper (1981) talks about the widespread devastation caused by the n**i?s, providing the force for the formal recognition of genocide as a crime under international law, despite genocidal events having been reprimanded by governments previously, including the French intervention with religious attacks taking place in Lebanon in 1861 and the governments of France, the U.K. ...read more.

Zimmerman (2000) would argue that the gypsies were not subjected to genocide due to a lack of premeditated intent from governing forces. The original purpose of the gypsy persecution was to impose a certain lifestyle upon those that did not fit within the n**i ideologies, and remove those that would not comply from the general German population, but not to exterminate the race. Local state and police officials emphasised asocial behaviour as the reason for persecution, and evidence of this is further demonstrated by the treatment of the Jenische (the white gypsies), who irrespective of racial affiliation were categorised in the same way due to their social nuisance (ibid: 219). Zimmerman agreed that the murder of many gypsies evolved due to circumstance. The mass killings of those unfit to work at Auschwitz for example was due to the overcrowding resulting from the masses of incoming Hungarian Jews, and at this point in the war, mass murder had become a common solution to problems such as this. Lewy estimates that between 5000 and 15000 gypsies were exempt from deportation and remained in the Reich, the latter figure would suggest more gypsies were exempt than were deported. Some were exempt because they were racially pure, and others because of social adjustment or meritorious military service. Gypsies considered to be socially adjusted were those with a regular job and permanent residence before the gypsy count in 1939 and no criminal record. ...read more.

They were caused bodily and mental harm, they were destroyed in part, and attempts were made to prevent their procreation. What happened to the gypsies during WW2 was horrific, and should be recognised using a clearer definition. The UNGC is only the first step in promoting international consciousness of the denial of human rights across the world. Reference: Fain, H. (1990) ?Social Recognition and Crimilization of Genocide? Current Sociology 38: pp1-7 Katz, D. (2009) ?on three definitions: Genocide, Holocaust Denial, Holocaust Obfuscation? in Donskis, L. ?A Litmus Test Case of Modernity. Examining Modern Sensibilities and the Public Domain in the Baltic States at the Turn of the Century?. Interdisciplinary Studies on Central and Eastern Europe 5: pp. 259-277 Kuper, L. (1981) ?Genocide: Its Political Use in the Twentieth Century?. New York and London: Penguin Lempkin, R. (1944) ?Axis Rule in Occupied Europe: Laws of Occupation. Analysis of Government. Proposals for Redress? Washington DC: Carnegie Endowment for International Peace. Lewy, G. (2000) ?The n**i Persecution of the Gypsies? Oxford: Oxford University Press Milton, S. (2001) ?Gypsies as social outsiders in n**i Germany? pp.212-232 in Gellately, R. and Stolzfus, N. (eds.) Social Outsiders in n**i Germany Princeton University Press Thompson, J and Quets, G. (1987) ?Redefining the Moral Order: Towards a Normative Theory of Genocide? New York: Columbia University Zimmermann, M. (2000) ?The National Socialist "Solution of the Gypsy Question," pp. 186-209 in Herbert, U. (ed.) ?National Socialist Extermination Policies: Contemporary German Perspectives and Controversies? New York: Berghahn Books ...read more.