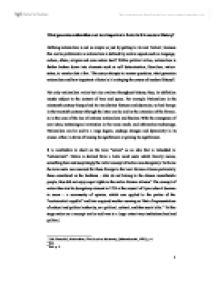 What generates nationalism and how important a factor is it in modern History? Defining nationalism is not as simple as just by getting to its root 'nation', because this can be problematic as nationalism is defined by certain aspects such as language, culture, ethnic, religion and even nation itself. Within political milieu, nationalism is further broken down into elements such as self determination, liberalism, nation-states, to mention but a few. This essay attempts to answer questions, what generates nationalism and how important a factor is it in shaping the course of modern History?. Not only nationalism varies but also evolves throughout history, thus, its definition maybe subject to the context of time and space. For example Nationalism in the nineteenth century Europe had its own distinct features and dynamics, so had Europe in the twentieth century although the latter can be said as the extension of the former, as in the case of the rise of extreme nationalism and fascism. With the emergence of new ideas, technological revolution in the mass media and information technology, Nationalism can be said to a large degree, undergo changes and dynamicity in its course, either, in terms of loosing its significance or gaining its significance. It is worthwhile to dwell on the term "nation" as an idea that is imbedded in "nationalism". Nation is derived from a Latin word natio which literally means, something born and surprisingly the initial concept of nation was derogatory.1In Rome the term natio was reserved for those foreign to the local Roman citizens particularly those considered as the heathens - who do not belong to the chosen monotheistic people, thus did not enjoy equal rights as the native Roman citizens.2 The concept of nation then lost its derogatory element in 1274 at the council of Lyon when it became to mean - a community of opinion, which was applied to the parties of the "ecclesiastical republic" and later acquired another meaning as 'that of representatives of cultural and political authority, or a ...read more.

Ethno-cultural Nationalism and idiosyncrasies against the "others" Ethnic identity among others is deemed to be the most significant and basic factor that generates nationalism as in 'ethno-cultural nationalism' throughout human history. What constitutes an ethnic nationalism? Within the realm of ethnocultural nationalism there are; language, religion, literature and customs among others. These are according to Ellie Kedourie, 'the peculiarities', 'the idiosyncrasies' that are to be fostered and preserved for they create harmony.29 'Language is the means through which a man becomes conscious of his personality. Language is not only a vehicle for rational propositions, it is the outer expression of an inner experience, the outcome of a particular history, the legacy of a distinct tradition'.30 Ellie Kedourie further argues, This theory has had immense political consequences. The world is a world of diversity, and humanity is divided into nations. Language is the external and visible badge of those differences which distinguish one nation from another; it is the most important criterion by which a nation is recognized to exist, and to have right to form a state on its own.31 Fichte in his Addresses to the German Nation goes so far as to say that 'we give the name of people to men whose organs of speech are influenced by the same external conditions, who live together, and who develop their language in continuous communication with each other.'32 This aspect of ethno-cultural nationalism is important as was demonstrated recently by the clash between the French speaking Belgians and the Dutch speaking Belgians in Belgium.33 David Brown argues ethnic nationalism or what he conveniently identifies as ethno-cultural nationalism 'is based on the myth of common ancestry, and of inherited ownership of an ancestral homeland'.34 Ibn Khaldun's idea of what bonds a society - maybe relevant to this discussion. Asabiyyah or group solidarity35 is essential in the formation of a society. This group solidarity maybe in form of sentimental feelings of sense of belonging based on common interests such as ethnicity, language, culture and religion. ...read more.

Strong ethnic identity vis-�-vis strong sentiment against the opposite "others" immediately reinforces nationalism. Factors such as language, religion, history, culture and literature are components that generate nationalism. Apart from politically motivated, extreme ethno-cultural nationalism can be a result of ignorance and prejudice of the opposite "others". With the weakening of Christianity, nationalism became the dominant spiritual force in the eighteenth and nineteenth century European life. There is a clear cut dichotomy between Christianity and the temporal life of the Europeans that makes reconciliation between the two became impossible despite the ecumenical nature of Christianity. Europe found nationalism as a practical alternative to solve social, political and economic problems facing it. Nationalists exploit people's sentiments by interpreting history from nationalistic point of view to serve political ends. National propagandas disseminated further nationalistic ideas, thus made it widespread. Nationalism as a result of revolutions in Europe since the 1789 French Revolution had changed the course of its history. It became an impetus as people's revolution for other successive people's revolutions in Europe and resulted in the emergence of nation-states thus, changed the map of Europe. Nationalism was instrumental in European imperial powers' race and expansion. Nationalism gave birth to other ideas such as liberalism and democracy that emphasises people's will and power as opposed to absolutism. Nationalism became an instrument to reinforce and justify totalitarianism and fascism. An idea such as Social Darwinism was exploited by totalitarian and fascist regimes to justify their political struggles. Although nationalism is capable to unite people, it can also be disastrous as demonstrated by the breaking out of the World War I and II and genocides in Europe. Human and economic loss resulted by the Great Wars in Europe made nationalism less significant and move toward regional unity as reflected by European organizations such as the EEC and recently, the EU. Nationalism is positive when it embraces diversity, democracy and loyalty to the states instead of ethnicity or nation and when the idea the opposite others can be put aside. This produces civic nationalism as a positive form of nationalism and makes shallow ethno-cultural nationalism become insignificant. ...read more.