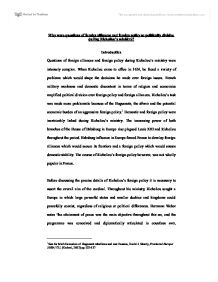 Why was Richelieu's foreign policy so politically divisive from 1624-42?

The d�vot argument was that the king's reputation could be won domestically, and the threat of rebellion because of increased taxation was a real threat.18 Despite the reservations of the king's council Louis XIII and Richelieu continued the campaign and by July 1630 fortune began to favour the French. The deaths of Charles-Emmanuel in Savoy and Spinola at Casale, and the encroachment of Gustavus Adolphus in Germany weakened France's enemies.19 By October it appeared the status quo in Europe was reinstated, but it was Richelieu's rejection of this which caused enormous political divisions in France. Richelieu's unexpected rejection of peace came as a result of his belief that it would compromise his plan for a European coalition to counterweigh Habsburg influence. The continuation of the march on Casale and direct confrontation with the Spanish was extremely controversial. Richelieu's critics argued that his actions meant the prospect of a potentially endless conflict with the Habsburgs.20 The criticism culminated in the Day of the Dupes, in which Louis XIII's faith in Richelieu was reinstated and eventually the Treaty of Cherasco was signed in 1631; a far more favourable agreement than that which had been proposed a year earlier. Richelieu's subsequent purge of his political opposition tightened his grip on French foreign policy. The War of Mantuan Succession is vital because it embodies division in France over both the practical and religious issues involved in confrontation with the Habsburgs. Richelieu's retention of power after the Day of the Dupes in 1630 is of great concern to understanding French foreign policy thereafter. Louis XIII and Richelieu's rejection of the terms at Regensburg defined subsequent foreign policy. The negative responses to Richelieu's foreign polices and alliances continued in the 1630s, and the French alliance with Sweden in the form of the Protestant Gustavus Adolphus embodied the new direction in which France headed. The prospect of open war with the Habsburgs increased; and with it the fear of the destruction of French political and religious power in Europe. ...read more.