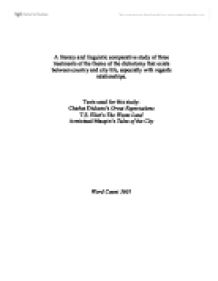 A literary and linguistic comparative study of three treatments

A literary and linguistic comparative study of three treatments of the theme of the dichotomy that exists between country and city life, especially with regards relationships. Texts used for this study: Charles Dickens's Great Expectations T.S. Eliot's The Waste Land Armistead Maupin's Tales of the City Word Count 3601 INTRODUCTION The dichotomy that exists between city and country life is a theme that many writers have been drawn towards across the centuries, not least since the Industrial Revolution. Typically, the country is associated with idyllic life, a place with a strong sense of community, where relationships are wholesome and meaningful and life ambles past at a leisurely pace, uncomplicated and relatively trouble free. In contrast, city life is most often portrayed as being full of complexities, where individuals work hard and play hard, and where life is self-orientated and relationships are often futile. Through a literary and linguistic comparative study of their works, Great Expectations, The Waste Land, and Tales of the City, respectively, I will attempt to show how Charles Dickens, T.S. Eliot, and Armistead Maupin deal with this theme, showing to what extent the depiction of city and country life within these texts corresponds or contrasts with the stereotype. In so doing, I will concentrate most fully on the relationships hat exist between the characters in each of the texts. Set in the heart of 1970's San Francisco, Armistead Maupin's novel, Tales of the City, follows the fortunes of Mary Ann, a twenty-something female protagonist who has moved to the city in search of a more exciting and fulfilling existence than her rural hometown of Cleveland can offer. Much like a soap opera in structure, the novel charts each episode that Mary Ann and her new-found acquaintances encounter within the bustle of the city. In a similar way, Great Expectations concerns the fortunes of Pip, a young male who moves from the countryside to the metropolis of London to realize his great expectations and become a financial and social success, only to find that these goals were not as great as he first assumed. ...read more.

This is shown when Lil's friend tries to persuade her to smarten herself up for Albert returning home from the army so that she can satisfy his s****l needs: I said, and think of poor Albert, He's been in the army four years, he Wants a good time, and if you don't Give it him, there's others will. (TWL, ll.147-50) Once again, the relationships held within the city are shown as being depraved and devoid of love, given the implication that Albert will be forced into an infidelity if Lil won't give him 'a good time'. Moreover, the fact that there are 'others' who 'will' readily give him 'a good time' suggests that immoral behaviour is commonplace. This is made even more deplorable by the fact that Lil's looks have become so 'antique' because, after giving Albert children, she has taken 'pills' to 'pull it off', meaning that she has had an abortion after falling pregnant once again (TWL, l.156). It seems that Lil is only there to satisfy Albert's libido and that if she is not s******y attractive to him, then she is of no use to her husband. As such, Eliot shows that city relationships are loveless and futile, no matter whether these are between singles or married couples, rich or poor. PART TWO - RELATIONSHIPS BASED ON LOVE AND RESPECT While the relationships described thus far are loveless and futile, these contrast greatly with the majority of relationships involved in Dickens's Great Expectations. More significantly, these relationships tend to be based in the countryside, rather than the city. For example, the relationship that exists between Pip's sister and her husband, Joe, is meaningful. No matter what happens, they continue to love one another, even if theirs is not an ideal relationship: throughout the novel, they fail to show any s****l passion for one another, or other outward expressions of love. Indeed, the closest Joe comes to showing that his thoughts are with his wife is when he tells Pip, 'Your sister, she's no worse than she were' (Great Expectations, page 208). ...read more.

This is shown when the thunder finally sounds in 'What the Thunder Said': Ganga was sunken, and limp leaves Waited for rain, while the black clouds Gathered far distant, over Himarant. The jungle crouched, humped in silence. Then spoke the thunder. (TWL, ll.396-400) Unlike the depersonalized human 'crowd' who cross London Bridge, even 'the jungle' is presented as an individual through Eliot's use of personification. Nevertheless, as all around anticipates the thunder, Eliot's use of syntax shows how this occurs spontaneously. This is shown in his following of 'Then' with 'spoke' rather than the more common "Then the thunder spoke". This use of syntax suggests that the noise startled everything and that recognizing that it was 'the thunder' occurred after the noise was made (when the thunder 'spoke'). As such, rural life being more closely associated with natural occurrences, it seems that Eliot is implying that it too is far more spontaneous and lacks the mechanical monotony of the predictable city life. CONCLUSION While the three texts address the theme of the dichotomy that exists between city and country life in different ways, each of them offers similar interpretations of this theme. The stereotype of city life being cold and unemotional, where relationships are self-orientated and futile, is for the most part apparent in all three texts. Moreover, the portrayal of country life as a far more moral and loving existence in Great Expectations and the depiction of country life being less monotonous and predictable than city life in Eliot's The Waste Land, also correspond with the stereotypes. Nevertheless, by showing that love and companionship can be found in the city, and that the cold mechanical heart can be found also in the country, respectively, Maupin's Tales of the City and Dickens's Great Expectations show that the stereotypes are too closely defined and that characters - and people's - individuality should not be discounted when assessing the nature of country and city life and the portrayal of them within works of literature. ...read more.