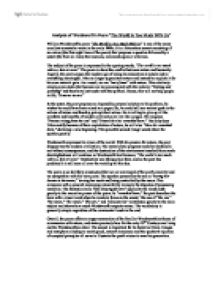 So, he could still see ancient gods in the actions of nature and thereby gain spiritual solace. He is willing to give up all the comforts and benefits of modern civilization to live like a pagan. He imagines "Proteus rising from the sea" and "Triton blow his wreathed horn." Not only does Triton notify humans of their exploitation of nature, he will also "blow his wreathed horn," declaring a new beginning. This peaceful seaside image would cheer the speaker greatly. Wordsworth expresses his views of the world. With his passion for nature, the poet disapproves the modern civilization. The materialistic progress made by mankind is not without consequences, and the destruction of the environment resulted from man's shortsightedness will continue as Wordsworth has foreseen, "The world is too much with us, late or soon." ...read more.

The fantastic simile "like sleeping flowers" applied to the winds adds greatly to the evocative power of the poem. In "wreathed horn," the poet describes the horn with a visual word when he wants to focus on the sound. The use of "the sea," "the moon," "the winds," "flowers," and "pleasant lea" contributes greatly to the main subject and shows how much Wordsworth respects nature. The vocabulary is generally simple regardless of the ornamental touch in the end. Overall, the poem offers an angry summation of the familiar Wordsworthian theme of communion with nature, and states precisely how far the early 19th Century was living out the Wordsworthian ideal. The sonnet is important for its rhetorical force. Images and metaphors alluding to man's greed, nature's innocence and the speaker's rejection of accepted principles all serve to illustrate the poet's vision to save his generation. ...read more.