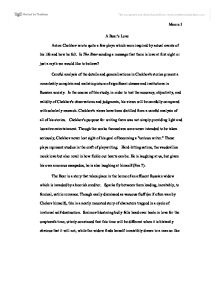 Anton Chekhov wrote quite a few plays which were inspired by actual events of his life and how he felt. Is The Bear sending a message that there is love at first sight or just a myth we would like to believe?

A Bear's Love Anton Chekhov wrote quite a few plays which were inspired by actual events of his life and how he felt. Is The Bear sending a message that there is love at first sight or just a myth we would like to believe? Careful analysis of the details and generalizations in Chekhov's stories present a remarkably complete and realistic picture of significant classes and institutions in Russian society. In the course of this study, in order to test the accuracy, objectivity, and validity of Chekhov's observations and judgments, his views will be carefully compared with scholarly research. Chekhov's views have been distilled from a careful analysis of all of his stories. Chekhov's purpose for writing them was not simply providing light and lucrative entertainment. Though the works themselves were never intended to be taken seriously, Chekhov never lost sight of his goal of becoming a "serious writer." These plays represent studies in the craft of playwriting. Hard-hitting satires, the vaudevilles mock love but also revel in how fickle our hearts can be. He is laughing at us, but given his own amorous escapades, he is also laughing at himself (Fen 7). ...read more.

It is alive in that its precedent, its law, its moral, still rules the social life of the natives. It is clear that myth functions especially where there is a sociological strain. . . . We can certainly discard all explanatory as well as all symbolic interpretations of these myths . . . (Holloway 123). No one can understand English literature unless he knows something about classical myths, for our writers from the Middle Ages to the present have used and still use classical myths in their stories and poems. Handbooks of mythology are nothing new; but today, when small Latin and less Greek are taught in our schools and when very few people are able to interpret references to classical myths from their own knowledge. In the last hundred years a number of books have been written, but they do not fully meet the needs of a reader of English literature because they focus on the myths themselves and pay little or no attention to the symbolic use of the myths in English literature. First, it is necessary to retell the myths and to retain, as far as is possible in a brief summary, the elements of individual character and concrete situation that give them life. ...read more.

Some readers may say that this is not at all what they mean by myths. What they mean are highly imaginative stories about the miraculous rescue of a princess from a monster, or the vengeance of the gods on a king who has incurred their wrath; how could such stories be supposed to confer life? Anyone who makes this objection has obviously limited his study of mythology to those myths which the classical writers abstracted from their religious context and used as a basis for poetry and romance. Myths in their proper context are seen differently, as will appear presently (Sebeok 77). Those who regard myths as the products of the imagination have not considered how the imagination works. Nobody can possibly imagine anything which has not been suggested to him by something which he has seen, heard, or read. Poets and novelists, by selecting from and combining ideas which have reached them in various ways, produce what are called works of the imagination, but those who formulated or recorded the myths could not have acted in this way. For the myths were so sacred that they could have been altered or added to only by those who believed themselves inspired, and even then to a very limited extent (Sebeok 77). ...read more.