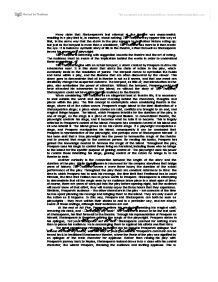 Many claim that Shakespeare's last attempt at the theatre was unsuccessful; resulting in a play that is, in essence, about nothing. The Tempest.

Many claim that Shakespeare's last attempt at the theatre was unsuccessful; resulting in a play that is, in essence, about nothing. The Tempest may appear this way at first, in the same way that the storm in the play appears to be Mother Nature acting up; but just as the tempest is more than a windstorm, The Tempest has more to it than meets the eye. It is instead a symbolic story of life in the theatre, a final farewell as Shakespeare leaves his career as a playwright. The Tempest is brimming with suggestion towards the theatre and the art of acting. The audience must be aware of the implication behind the words in order to understand these suggestions. The Tempest begins with an actual tempest, a storm created by Prospero to draw his adversaries near. It is this storm that starts the chain of action in the play, which eventually leads to the resolution of justice. The tempest comes to symbolise the twists and turns within a play, and the illusions that are often discovered by the viewer. ...read more.

By reading his books, Prospero has gained the knowledge needed to harness the magic of the island. Throughout the play, Prospero uses his magic to control those living on his island, including those who he brings to the island for the specific purpose of gaining control of. The playwright uses his power to control those inhabiting his stage, gaining control of the actors he brings in to his theatre to train. Another curiosity is the connection between the length of the story and the duration of the play. While Shakespeare is renowned for his complex storylines that bridge years of history, The Tempest covers a mere three hours, the duration of the actual performance of the play. Throughout the play there are constant references to time: the time in which Prospero has to seek his revenge, the time limit that Ferdinand has to court Miranda, the time that Caliban has to prove worth to Prospero. Shakespeare is attempting to demonstrate that all the magic seen by an audience takes place in a short span of time; of course, there are years ...read more.

This is obviously not traditional - a play is normally written with the characters being unaware of the presence of the audience; therefore Prospero's direct address to the audience seems to place him directly in the role of playwright. A reader of The Tempest can easily see how Shakespeare uses the characters of Prospero to say goodbye to his audience for the last time. It can be assumed that Shakespeare found this type of farewell to be the most appropriate form to give the followers of his theatre. What better way to say goodbye than through what the audience desire? By writing an allegorical look at the life of theatre as a final tribute, not only is Shakespeare saying goodbye in an original way, he is also paying respects to those he leaves behind. One thing is certain: Shakespeare will live on through within the dreams and hopes of those who read his work. As Prospero, he says: 'We are such stuff as dreams are made one, and our little life is rounded with sleep.' ...read more.