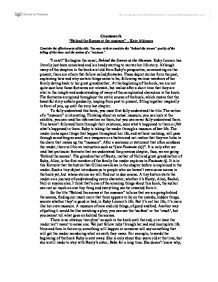 &quot;Behind the Scenes at the museum&quot; - Kate Atkinson Consider the effectiveness of the title. You may wish to consider the &quot;behind the scenes&quot; quality of the telling of the story and the notion of a &quot;museum&quot;.

Coursework "Behind the Scenes at the museum" - Kate Atkinson Consider the effectiveness of the title. You may wish to consider the "behind the scenes" quality of the telling of the story and the notion of a "museum". "I exist!" So begins the novel, Behind the Scenes at the Museum. Ruby Lennox has literally just been conceived and is already starting to narrate her life story. Although many of the chapters in the book are told from Ruby's perspective, commenting on the present, there are others that follow called footnotes. These depict stories from the past, explaining how and why certain things came to be, following various members of her family dating back to her great grandmother. At the beginning of the book, we are not quite sure how these footnotes are relevant, but realise after a short time that they are vital to the insight and understanding of many of the complicated characters in the book. The footnotes are spread throughout the entire course of the book, which means that the beautiful story unfurls gradually, leaping from past to present, fitting together magically in front of you, up until the very last chapter. ...read more.

much more that there appears to be on the outside, hidden things, secrets whether they're good or bad, in Ruby Lennox's life. But it's not her life; it's more like her own museum. A museum of new and old things, of good and bad. Another way of putting it would be like watching a play; you can see the 'surface' or the 'result', but you cannot tell what goes on behind the scenes. There is no obvious 'storyline' as such in the book until the end, or at least the reader isn't meant to sense one. We just follow ruby through her sad and incomplete life. Now and then in the story, something will happen or someone will say something that will get the reader wondering what on earth they mean. For example, towards the beginning of the book Ruby is sent away. She is only about four years old at the time, but she is still made to stay with Bunty's sister, Babs for a long time. She doesn't know why, and neither does the reader. The reader is in a permanent state of confusion throughout the chapter, almost feeling the same as Ruby. ...read more.

"'You killed your own sister, Ruby! You killed your own sister! ...' He shouted... 'I did not kill my own sister!' I [Ruby] hissed back at him. 'She was run over!'" (She's referring to Gillian). "'I [Mr Belling] don't mean that one, you stupid little girl, I mean your twin sister!'" Here comes the final plot twist. Ruby had a twin sister, Pearl. There was an accident when she was about four where Pearl fell through thin ice and drowned. Ruby got blamed because Gillian had feared that it would be her who'd be blamed because she had told Pearl to go out onto the thin ice. After the accident, Ruby suffered from amnesia, which is why she has no recollection of it, and why she'd never told anyone that it was actually Gillian's fault. When the reader finds this out, every single unanswered question in the book is suddenly and finally resolved. Things like the two pictures in the locket, the 'accident', and the way that everyone nearly calls her Pearl before they can remember she's Ruby. We have looked into Ruby's past, Ruby's present and even slightly into her future. We've read her thoughts, acknowledged her fears and explored things she herself had forgotten. The reader has truly gone behind the scenes. ...read more.