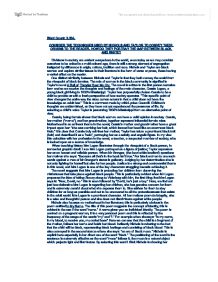 Consider the techniques used by Nichols and Taylor to convey their origins to the reader - How do they portray the gap between black and white.

Word Count: 3,364. CONSIDER THE TECHNIQUES USED BY NICHOLS AND TAYLOR TO CONVEY THEIR ORIGINS TO THE READER. HOW DO THEY PORTRAY THE GAP BETWEEN BLACK AND WHITE? Divisions In society are evident everywhere in the world, even today as we may consider ourselves to be united in a multi-cultural age, there is still a strong element of segregation instigated by difference in origin, culture, tradition and race. Nichols and Taylor are black women and explore similar issues in their literature in the form of verse or prose, these having a varied effect on the reader. One distinct similarity between Nichols and Taylor is that they both convey the world from the viewpoint of black females. The role of women in the black community is signified in Taylor's novel A Roll of Thunder Hear My Cry. The novel is written in the first person narrative form and so we receive the thoughts and feelings of the main character, Cassie Logan, a young black girl living in 1930's Mississippi. Taylor has purposefully chosen Cassie to be a child to provide us with a fresh perspective of how society operates. "This specific point of view changes the entire way the story comes across in that a child does not have the knowledge an adult has." This is a comment made by critic Lynlee Councill. Children's thoughts are unblemished, as they have not yet experienced the pressures of life. By selecting a child's voice Taylor is presenting 1930's Mississippi from an alternative point of view. Cassie, being female shows that black women can have a valid opinion in society. Cassie, her mother ("mama"), and her grandmother, together represent influential female roles. Motherhood is an eminent theme in the novel; Cassie's mother and grandmother have a great impact upon her: "she was combing her hair, which fanned her head like an enormous black Halo." It is clear that Cassie truly admires her mother; Taylor has taken a prominent black trait (hair) ...read more.

For herself and for her father. For her brothers and her mother. For Strawberry and Mississippi, and by the time I finished jerking her head she would have apologised for the world being round had I demanded it." The exertion of power is not by some one who is rich and white but someone who is middle class and black. Equilibrium is reached which promotes impartiality, the insignificance of colour in humanity. This is a substantial issue in the novel, perhaps the most vital one. Taylor had used Lillian Jean, a high-class white girl and made an example of her, to show how the treatment of black people was unfair, trivial and in some cases traumatic. In the fifth chapter of the book Cassie is forced to apologise to Lillian Jean simply for standing in front of her: "You can't watch where you going, get in the road. Maybe that way you wont be bumping into decent white folks with your little nasty self." Here, we can understand why Cassie longs for revenge. The spitefulness of Lillian Jean's words and the demands she makes upon Cassie are horrendous and unjustified. She makes Cassie feel so inferior to her simply because she is black, this is emphasised in the two contrasting words "decent" and "nasty." These words simply meaning white (decent) and black (nasty). In my view this shows the difference in thought between white and black people of that time, white people considered themselves to be of a higher status, with more wealth and control. Black people viewed white people simply as racists, people who were their equal but have more power and so had to be treated with more respect. As readers we empathise with Cassie and the whole concept of r****m. This is evident in Misty Pitts review of the book: "Anyone who reads this book acquires a new "appreciation" for the black people's heritage and also feels shame for how people used to think." ...read more.

A novel offers us more of an explanation, and a more autobiographical and somewhat understandable point of view. For every opinion that is suggested there is a suitable explanation in the novel, for example, there is a reason to loath wealthy white people in the form of the Wallace's, but one major difference between the two authors was in their view of the gap between black and white. Nichols considered white people to be from a distant race to her, when she moved to England she felt she did not fit in, there is a distinct element of vastness there. While Taylor conveys a similar mood at times in her novel the equality and liberty is shown in the character of Jeremy (who belongs to the Wallace's). The fact that Taylor used Jeremy to represent a liberal minded white person shows us that Taylor (despite her experiences) is not prejudiced against white people. For Nichols, there is an element of deprivation involved. She is being deprived of something she once had; this explains the intensity of her views. However, for Taylor the situation is different, she never lived in an all black society, she never knew what it was like to be treated like a normal human being and so we can see there is more acceptance on her part. Discrimination and injustice against blacks was not abolished from Mississippi until the 1960's and the events described in this book are taken from around 1933. Taylor was born and bred in a society, which was full of discrimination, and poor treatment and this is clearly shown in her novel. It is apparent that injustice has been a disturbing part of both Nichol's and Taylor's lives; their literature shows evidence of their unfair individual and cultural treatment and their views towards it. It informs us about a controversial state of affairs and by analysing their literature we can see how far black people have come since the 1930's. We can also see them moving forward in the present society, their dream towards liberation is slowly being accomplished. ...read more.