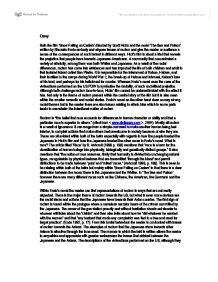 Both the film 'Snow Falling on Cedars' directed by Scott Hicks and the novel 'The Sea and Poison' written by Shusaku Endo embody and expose issues of racism and give the reader or audience a sense of the consequences of such hatred in different ways.

Essay Both the film 'Snow Falling on Cedars' directed by Scott Hicks and the novel 'The Sea and Poison' written by Shusaku Endo embody and expose issues of racism and give the reader or audience a sense of the consequences of such hatred in different ways. Hick's film is about a trial that reveals the prejudice that people have towards Japanese-Americans. A community that concentrated a variety of ethnicity, among them was both Whites and Japanese. As a result of the racial differences, racism has come into existences and has impacted the life of both children and adult in that isolated island called San Piedro. It is responsible for the internment of Kabuo, Hatsue, and their families to the camps during World War 2, the break-up of Hatsue and Ishmael, Kabuo's loss of his land, and perhaps for his indictment for murder. Whereas Endo's novel uses the case of the vivisections performed on the US POW to symbolise the brutality, of such uncivilised prejudice. Although both challenge racism face-to-face, Hicks' film cannot be underestimated with the effect it has. Not only is the theme of racism present within the central story of the film but it is also seen within the smaller romantic and social stories. Endo's novel on the other hand does convey strong racial themes but to the reader there are also issues relating to ethnic bias which in some parts tends to overwhelm the intentional matter of racism. Racism is "the belief that race accounts for differences in human character or ability and that a particular race is superior to others." (cited from < www.dictionary.com >, 2004). Mostly all racism is a result of ignorance. It can range from a simple comment to make another human being feel inferior, to complex actions that make others feel unwelcome in society because of who they are. These are all evident within both of the texts especially with regards to how the people treated the Japanese in Hick's film and how the Japanese treated the other races in Endo's novel. ...read more.

When comparing this to the treatment of Mrs Tabe, the old lady is treated with complete disrespect. For Mrs Tabe her doctors are seen to be confident that she will make a full recovery from a successful operation, whereas even thought it seems to be a similar operation for the old lady she is given no chance of survival. The whole hospital just accepts the fact that she will not live. Issues of social inequality are explored through the treatment of both of these patients who undergo similar operations. There is a clear distinction between the professional and optimistic treatment of Mrs Tabe to the neglected and pessimistic treatment of the old lady. This is so touching that it takes the readers thought away from the main issue of racism to the issue of social inequality within Japan. Because of this the issue of racism which is supposed to be the major theme within the novel now becomes a secondary theme. Thus leading more to the fact that Endo's novel is less profound than Hick's film in bringing forth the issues of racism. Although in 'Snow Falling on Cedars' there is evidence of minor themes within the story just like that of 'The Sea and Poison', there is a difference. The Minor themes in Hick's film do play some part within the issue of racism, whereas in Endo's novel his minor themes can be linked to broader social issues like social inequality like mentioned before. For example in Hick's film there is the romance between Hatsue and Ishmael, which is powerful issue but it does not take control over the main racism issue, infact in some way they actually compliment or help to emphasis the racism issue. The romance being that it is forbidden shows the audience of the attitudes of the community towards mixed relationships and it gives the audience an understanding into the influence of racism as it is this influence which splits Hatsue and Ishmael apart. ...read more.

As it says "Afterwards I realized that they were being catty about her visit to the ward patients every time she came to the hospital.....the fact is that we nurses didn't appreciate her goodness very much". Also later they refer to her again in that they say "She barged in again today, didn't she? But doctor, you have so much respect for her. Respect for her, eh? Just for the fun of it, I'd like to sleep with that white women once......Hey, why don't you try your luck with Dr Hashimoto? That would really fix old Hilda." There is also much racism within the character of Toda through the way he treats his patients in that he seems to have conscious whatsoever. "A patient would die.....and I would put on a sad, sympathetic expression. But once out in the corridor, the spectacle would pass out of my mind." And also later how he treats any female he comes into contact with "What flashed through my mind was not a feeling of concern that I had marked this girl for life but rather that there would be hell to pay if a baby were born." There is also racial difference seen with regards to the vivisections and how Suguro chickened out of them as was stuck in the room as they conducted the operations on the US soldiers and one of the Japanese officers saw him and became angry as he says "How can a young Japanese be so weak?" To the Japanese it was considered a sense of weakness to not go through with the vivisections like Suguro did as it was not like it was their own people it was the enemy. Compare that to the Western race it wouldn't be considered a weakness they would be considered human because unlike the Japanese race they have a conscious. Conclusion Snow falling on Cedars provides a better representation of race. Although both are ficticious, even Sea and Poison provides historical ideology, Sea and Poison could completely confuse the issue of racial attitude. ...read more.