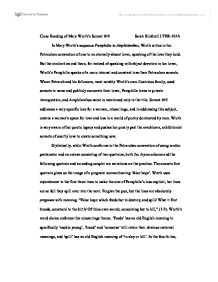 Close Reading of Mary Wroth's Sonnet #40 Sarah Kimbrell LTBR-104A In Mary Wroth's sequence Pamphilia to Amphilanthus, Wroth writes in the Petrarchan convention of one to an eternally absent lover, speaking of the love they hold. But the similarities end there, for instead of speaking with abject devotion to her lover, Wroth's Pamphilia speaks of a more internal and constant love than Petrarchan sonnets. Where Petrarch and his followers, most notably Wroth's own illustrious family, used sonnets to name and publicly exonerate their lover, Pamphilia loves in private introspection, and Amphilanthus name is mentioned only in the title. Sonnet #40 addresses a very specific loss for a woman, miscarriage, and in addressing this subject, creates a woman's space for love and loss in a world of poetry dominated by men. Wroth is very aware of her poetic legacy and pushes her poetry past the overblown, exhibitionist sonnets of courtly love to create something new. Stylistically, while Wroth conforms to the Petrarchan convention of using iambic pentameter and an octave consisting of two quatrains, both the rhyme scheme and the following quatrain and an ending couplet are variations on the practice. ...read more.

Mary Wroth's predecessors being all men annexed the metaphor of pregnancy and birth to mean that their own writings were like children of the mind. 'False hope' now takes on a new meaning, that men themselves carry a false hope of taking from women sole creative power. "And plenty gives the greater dearth" (4) can be construed as the prolific amount of male writing being costly to women's own literary creativity, taking it as ransom for a woman's natural abilities. The next quatrain changes subject a bit, elaborating on the theme of men, women and creative production. Wroth makes use of enjambment here again to bleed the two subjects together. The 'dearth' line flows into the next which reads "So tyrants do who falsely ruling earth/ Outwardly grace them, and with their profits fill," (5-6) accords with the reading on male creativity. The 'tyrant' means a usurper of power, and considering the convention of the Petrarchan sonnet which personifies women merely as objects to pine over, men were undoubtedly the 'absolute rulers' of this form. ...read more.

a child. This 'fair show' does not help but hinder women being viewed as people. 'Show' means only the outward aspects of a person, and as much as the male sonneteer croons over his lovers 'coral lips' or some such nonsense, he fails to penetrate the heart of his lady. The line "Hope kills the heart, and tyrants shed the blood" (12) is a wonderful line in that it brings our two major themes together, just before the ending couplet. From inside (the heart) and outside (tyrants shedding blood), the speaker believes the convention of courtly love is killing the woman's space. The ending couplet acts as sort of a 'moral' warning. "For hope deluding brings us to the pride/ Of our desires the farther down to slide." (13-14) The speaker wants to convey that our 'false' (deluding) hope creates pride, which in old English had the specific meaning 'love of display or ostentation'. The hope of men to win hearts by objectifying and wooing publicly will not suffice, but rather is as detrimental to a woman's heart and love as the pain of losing a child. In this sonnet Mary Wroth has finally given a woman's voice to a poetic form in which women were portrayed, but never conveyed. ...read more.