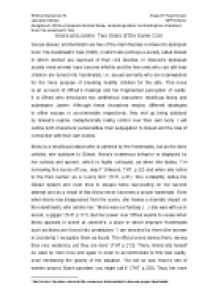 Comparing and contrasting two characters from The Handmaids Tale. Moira and Janine: Two Sides of the Same Coin

ï»¿Written Expression IV Essay IV: Final Version Leonardo Gómez 10th October Assignment: Write a Compare-Contrast Essay, comparing and/or contrasting two characters from The Handmaid’s Tale Moira and Janine: Two Sides of the Same Coin s****l slavery and feminism are two of the main themes in Atwood’s dystopian book The Handmaid’s Tale (1986), in which she portrays a society called Gilead in which women are deprived of their civil liberties. In Atwood’s dystopian society most women have become infertile and the few ones who can still bear children are turned into handmaids, i.e. s****l servants who are brainwashed for the mere purpose of breeding healthy children for the elite. This novel is an account of Offred’s musings and her fragmented perception of reality. It is Offred who introduces two antithetical characters: rebellious Moira and submissive Janine. Although these characters employ different strategies to either escape or accommodate respectively, they end up being subdued by Gilead’s regime, metaphorically losing control over their own body. ...read more.

The official creed denies them, denies their very existence, yet they are here? (THT p.213). There, Moira lets herself be used by men once and again in order to accommodate to this new reality, even minimizing the gravity of the situation: ?it?s not so bad, there?s lots of women around. Butch paradise, you might call it? (THT p.228). Thus, her once rebellious identity fades as she loses control of her body. In this way, it can be deduced that even the most rebellious personality subdues to Gilead. Unlike Moira, Janine is seen as a straight-laced, submissive character who is constantly trying to accommodate to Gilead, but in the end, she gets subdued as well. Her submissive behaviour is clearly displayed when, at the Red Center, she blames herself for having been gang-raped in the pre-Gilead society, as a strategy for accommodation: ?It was my fault, she says. It was my own fault. I led them on. ...read more.

For her, losing the relationship with her body implies losing her mind as well. In conclusion, Janine had done everything to accommodate to this society: she pleased the Aunts, she became a spy, and she even bore a child; but she never accomplished her purpose of becoming accepted and, as compared to Moira, she is subjugated to Gilead, metaphorically losing both mind and body. As I have already stated, Moira and Janine present both differences and similarities. The boldest differences between them are their personalities and their strategies to either escape or accommodate to Gilead. But even these antithetical characters have a similar destiny: their subjugation to the society and the metaphorical loss of connection with their own bodies. The implication that arises from this comparison is that were a society like this be established, women would not only be morally affected, but they would also lose their own identity. Another line of research worth pursuing further is to study the effect that a society like this could have on today?s world. ...read more.