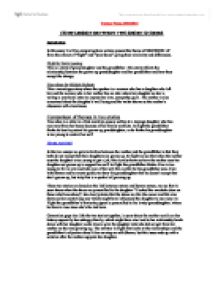 Terence Vuma (30118844 COMPARISION BETWEEN TWO SHORT STORIES Introduction In this essay I will be comparing how writers present the theme of GROWING UP from the extract of "flight" and "your shoes" giving their similarity and differences. Flight by Doris Lessing This is a story of grand daughter and the grandfather .This story reflects the relationship between the grown up granddaughter and her grandfather and how they accept the change. Your shoes by Michele Roberts This a monologue story where the speaker is a woman who has a daughter who left her and the woman who is her mother has no idea where her daughter so she is writing a emotional letter to express her love, sympathy, guilt . ...read more.

In flight the grandfather thinks Alice is too young to fall in love and take care of her self, this is after he the grandfather sees Alice with Steven and he reacts quickly to show his granddaughter that he doesn't accept that she's grown up, but truly this is a symbol of growing up. These two stories are based on the link between nature and human nature; we see that in your shoes when the shoes are personified to the daughter "I locked the wardrobe door on those rebellious shoes", she clearly states that the shoes are like the owner and this also shows us her controlling way which might have influenced the daughter to run away. ...read more.

Alice also cries at the end when she realises she's grown up to take care of her self and her grandfather, but she shows a bit of maturity with Steven when they buy her grandfather a present to show their love. In your shoes they is no conclusion we see that when the mother hopes her daughters come back and she acts as if the daughter comes back. In your shoes the mother shows her vivid description of her pain, as if she talking to the daughter, on the other hand she tries to hide her emotions from other people even her husband as she locks the room because she does not want to be disturbed in her fantasy. ...read more.