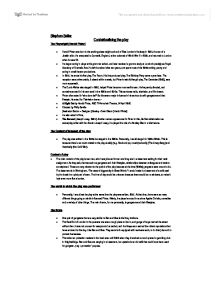 Contextualising the play - A Night Out by Harold Pinter

Stephan Seiler Contextualising the play The Playwright (Harold Pinter) * Harold Pinter was born in the working-class neighbourhood of East London's Hackney in 1930, the son of a Jewish tailor. He evacuated to Cornwall, England, at the outbreak of World War II in 1939, and returned to London when he was 14. * He began acting in plays at his grammar school, and later received a grant to study at London's prestigious Royal Academy of Dramatic Arts. He left the school after two years, and spent most of the 1950s writing poetry and acting in small theatre productions. * In 1957, he wrote his first play, The Room. His first produced play; The Birthday Party came a year later. The reception was unfavourable, it closed within a week, but Pinter's next full-length play, The Caretaker (1960), was more successful. * The Dumb Waiter also staged in 1960, helped Pinter become more well known. He frequently directed, and sometimes acted in his own work in the 1960s and 1970s. This work was radio, television, and film based. * Pinter often acted in "who done its?" So this was a major influence in his work to do with gangsters and that lifestyle. ...read more.

* The East End of London in the post-war era was a rough place to live in, and gangs of boys roamed the street without fear. It was not unusual for weapons to be carried, and the Krays soon earned the violent reputations that have endured to this day. Like Ben and Gus. They were both equipped with revolvers each, to do their jobs and to protect themselves. * The twins ran protection rackets in the local area until 1960 when they branched out and opened a gambling club in Knightsbridge. Ben and Gus are staying in a basement, but upstairs is an old caf� that could have been used for gangster, 'pay - protection' purpose. * Also, Ronnie Kray was h********l. One could set Gus as being h********l, because he is not as rough and 'manly' as Ben. 50 - 60s * Back in 1959 the then Tory Prime Minister, Harold Macmillan, went into an election with the slogan that the British people "had never had it so good as under the Conservatives." Economic growth was over 3% a year, wages were rising, house prices were firm and, above all, everybody was in work - and all this with low inflation. ...read more.

* Ben and Gus could be under surveillance of the people above the basement just like in Orwell's novel. These two are strongly linked with each other because both are under surveillance. The Play in the context of the modern world * A twenty first century audience would find the play appealing and interesting because our society is much concerned with hiding in the modern world. For example, there are still a lot of organized gangs today. For example, Mafia, Yakuza and Triads etc. * Ben and Gus could have been seen as hiding from terrorists or something else outside that would cause harm to them. Perhaps they are terrorists themselves or members or members of the security services, hiding from something else. * A recent, major terrorist act that occurred was when two planes flew into the World Trade Centre's Twin Towers in New York, killing over 5,000 people. Ben and Gus could be part of the evil that is outside as embodied in such terrorist attacks. * There are still plenty of hit men or bounty hunters around today. Another reason for the audience being appealed to this play is that jobs including assassinations cause interest because there are many modern television programs and movies, which include such actions, for example, The Sopranos and the James Bond series. ...read more.