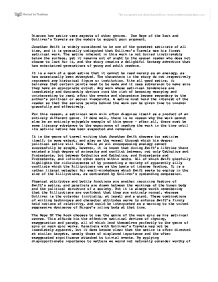 Discuss how satire uses aspects of other genres. Use r**e of the Lock and Gulliver's Travels as the models to support your argument.

Discuss how satire uses aspects of other genres. Use r**e of the Lock and Gulliver's Travels as the models to support your argument. Jonathan Swift is widely considered to be one of the greatest satirists of all time, and it is generally undisputed that Gulliver's Travels was his finest satirical work. The satire inherent in this work is not buried irretrievably below the surface, yet it remains out of sight to the casual reader who does not choose to look for it, and the story remains a delightful fantasy adventure that has entertained generations of young and adult readers. It is a mark of a good satire that it cannot be read merely as an analogy, as has occasionally been attempted. The characters in the story do not respectively represent any historical figure or institution. Like all good satire, it believes that certain points need to be made and it uses subversion to make sure they have an appropriate outlet. ...read more.

Physical attributes and bodily functions are another recurring feature of Swift's satire, and parallels are drawn between the workings of the human body and the political structure of a society. But it is always worth remembering that the Lilliputians are confident that they are entirely normal, whereas Gulliver is the outsider (initially, at least) and a giant. These combinations of writing techniques and character attitudes serve to enforce Swift's firmly held notions of relativity, and could be interpreted as a warning to the united aggressive dominance of Europe's ruling body at that time. The r**e Of The Lock chooses to use the genre of the mock epic as his satirical canvas. This affords him the effective satirical devices of rhyming, exaggeration and parody, all of which lend themselves perfectly to the genre of epic or mock epic works. Parallels with Gulliver's Travels may not be immediately apparent, but it does become clear that the satire is often directed at similar targets, namely those of misplaced importance and the often exaggerated significance attached to trivial events. ...read more.

Gossip and glory are discussed in equal measure, and the widespread distortion of social values echo throughout every further couplet. It can therefore be seen that Pope echoes some of Swift's satirical points about the often obsessively trivial nature of human conflict, and that the genres of the mock epic and travel writing both have different but equally valid qualities to lend to these points. In the case of Swift, a travel account is an ideal way to justly present an outsider's viewpoint of an apparently ridiculous society, forcing us to take a step outside our own preconceptions and re-evaluate the values of our own society now that its absurdities can be viewed more clearly. Whereas by presenting The r**e Of The Lock as a mock epic, Pope's tone is more inherently sarcastic and satirical, and the trivialities of our ritualistic habits are satirised by presenting them with such obviously exaggerated grandiosity as to alert the audience to how silly these human foibles can appear. ...read more.