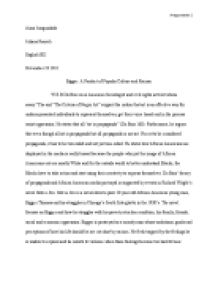 ﻿Arogundade Aima Arogundade Juliana Rausch English 802 November 19 2012 Bigger: A Product of Popular Culture and r****m W.E.B Du Bois is an American Sociologist and civil rights activist whose essay ?The and ?The Criteria of n***o Art? support the notion that art is an effective way for underrepresented individuals to represent themselves, get their voice heard and in the process resist oppression. He states that all ?art is propaganda? (Du Bois 160). Furthermore, he argues that even though all art is propaganda but all propaganda is not art. For art to be considered propaganda, it has to be two-sided and not just one-sided. He states how African Americans are displayed in the media is really biased because the people who put the image of African Americans out are mostly White and for the outside world to better understand Blacks, the Blacks have to take action and start using their creativity to express themselves. Du Bois? theory of propaganda and African American media portrayal is supported by events in Richard Wright?s novel Native Son. Native Son is a novel about a poor 20 year old African American young man, Bigger Thomas and his struggles in Chicago?s South Side ghetto in the 1930?s. The novel focuses on Bigger and how he struggles with his poverty stricken condition, his family, friends, racial and economic oppression. ...read more.

Although he realizes that the racial prejudices placed on him limit him from attaining his full potential, he still cannot get used to it and he tries as much as he can to change it although he goes about it the wrong way. The media continually portrays Blacks as animalistic brutes who lack any human sense, and it therefore becomes unavoidable that blacks such as Bigger will react with violence and hatred toward the White society. This hatred is seen clearly in Bigger?s thoughts when he comes across the billboard of Buckley that says ?YOU CAN DO IT?. The misrepresentation of the black people as being savage and barbarian in their behaviors establishes false stereotypes among the whites and consequently constructs walls of fear and suspicion between both sides. Also the misrepresentation of whites as always happy, extremely rich, and comfortable, hardens racial stereotypes. The media?s inability to reflect the good part side by side with the bad part of both sides gives room for white?s ignorance to oppression they are producing and mistreatment of the black American and also hatred and spite from the Black Americans. This one sided portrayal of both races is also what Du Bois argues in his article Criteria of n***o Art. Du Bois argues that although all art is propaganda, one-sided propaganda gives the public an incorrect and sometimes negative view on both parties which leads to racial profiling and discrimination. ...read more.

something to be caged. due to the debatable as the final scene is, in which for the first time Bigger calls a white man by his first name, Bigger is never anything but a failed human. He represents the black man conscious of a system of racial oppression that leaves him no opportunity to exist but through crime. " He even admits to wanting to be an aviator and later, to Max, he admits to wanting to be a great number of things. He can do nothing but be one of many blacks in the ghetto and maybe get a job serving whites; crime seems preferable. Not surprisingly, then, he already has a criminal history, and he has even been to reform school. Ultimately, the greatest thing he can do is transgress the boundary the white world has set for him. He can violate what those who oppress him hold sacred and thereby meet the challenge they set in establishing their boundaries. This recalls to our minds the necessity of reforming media so that they can attain neutralism in their portrayal of the human relations regardless of their racial or cultural identities. We are in dire need of those media nowadays whose main objective lies in promoting oneness among nations of the world and transcending beyond the boarders of nationalism and r****m. Wright scatters images of popular culture throughout Native Son, constantly reminding us of the extremely influential role the media plays in hardening already destructive racial stereotypes. ...read more.