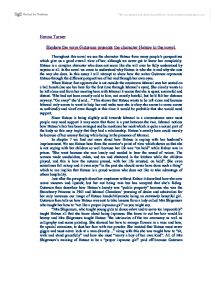 Explore the ways Guterson presents the character Hatsue in the novel.

Emma Turner Explore the ways Guterson presents the character Hatsue in the novel. Throughout this novel we see the character Hatsue from many people's perspectives which give us a good overall view of her, although we never get to know her completely. Hatsue is a complex character who does not seem like she will ever be fully understood by anyone at all. In the novel we come to understand why Hatsue is who she is and why she acts the way she does. In this essay I will attempt to show how the writer Guterson represents Hatsue through the different perspectives of her and through her own eyes. When Hatsue first appears she is sat outside the courtroom Ishmael sees her seated on a hall bench (we see her here for the first time through Ishmael's eyes). She clearly wants to be left alone and from her meeting here with Ishmael it seems that she is upset, sorrowful and distant. "She had not been exactly cold to him, not exactly hateful, but he'd felt her distance anyway. "Go away" she'd said..." This shows that Hatsue wants to be left alone and because Ishmael only seems to want to help her and make sure she is okay she seems to come across as unfriendly and aloof even though at this time it would be probable that she would need support. ...read more.

He says "It was like Hatsue not to answer" which I think interprets the mysteriousness and our unknowingness of Hatsue all together. This quote could show us how she doesn't answer, how she doesn't speak to no one, how she can hide things and compose herself just like Mrs Shigemura taught her to. For example we would never know why Hatsue broke up with Ishmael; whether she really thought it was wrong deep down inside of her or whether it were the imbedded thought that were drilled into her as a child, by her mother and Mrs Shigemura, that having a hakujin boyfriend was wrong. "It was like Hatsue not to answer". It was like Hatsue to not let us know the real truth. Guterson seems to portray her as an anti-revelation type. In chapter 12 we hear Ishmael's side of his and Hatsue's relationship. Hatsue never really revealed anything so we get to know her past relationship with Ishmael through him. He gives the idea of a very lustful, s****l relationship "slippery softness of their lips and tongues..." We learn here that it is not just us that cannot full understand the workings of Hatsue but Ishmael too. "Even when he held her it seemed to him there was a place in her heart he couldn't get to. At times he worked himself up to discussing this, gradually revealing to her how it hurt him to feel there was a part of her love she withheld. ...read more.

Overall I think that Guterson explores and presents Hatsue in a very good way. She seems to be the kind of character were you always want to know what she is thinking because she doesn't let emotion out. From her upbringing, especially with Mrs Shigemura, I can directly link and attempt to explain why she is how she is. For example when she took lessons from Mrs Shigemura she was always taught how to conceal her emotions and not be expressive but remain composed. Hatsue has turned into the woman Mrs Shigemura and Fujiko wanted and it seems that Hatsue likes the acceptance of them and having a marriage that works rather than living a lustful life with Ishmael. I think the way that Guterson presents Hatsue to us as a character who we will never know fully makes her more enduring and interesting because we humans we like to get both sides of the story and for example with Ishmael and Hatsue's relationship we only really know Ishmael's true feelings. What Hatsue seems to presents to us is what she thinks she feels. Guterson presents Hatsue wonderfully because she is an intriguing character and by making a direct link between her past and her future I feel I can see the whole outline of her life and understand why Hatsue is who she is and why she acts the way she does, but no one will ever know her heart. ...read more.