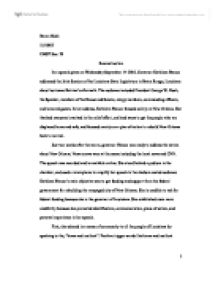 Governor Kathleen Blanco was persuasive in her address to rebuild New Orleans. Her speech takes on a motivated sequence design

Baron Muth 11/18/05 CMST Sec. 29 Reconstruction In a speech given on Wednesday September 14 2005, Governor Kathleen Blanco addressed the Joint Session of the Louisiana State Legislature in Baton Rouge, Louisiana about hurricane Katrina's aftermath. The audience included President George W. Bush, the Speaker, members of the House and Senate, clergy members, commanding officers, and honored guests. In her address, Kathleen Blanco focused solely on New Orleans. She thanked everyone involved in the relief effort, outlined ways to get the people who are displaced home and safe, and focused mainly on a plan of action to rebuild New Orleans back to normal. Just two weeks after the storm, governor Blanco was ready to address the nation about New Orleans. News crews were at the scene including the local news and CNN. The speech was recorded and is available online. She stood behind a podium in the chamber, and used a microphone to amplify her speech to the stadium seated audience. Kathleen Blanco's main objective was to get funding and support from the federal government for rebuilding the rampaged city of New Orleans. She is credible to ask for federal funding because she is the governor of Louisiana. ...read more.

This act commemorated everyone who was involved in the restoration efforts. She explained how Louisianans owe a great deal to everyone involved by using an imaginative expression to say, "as long as the Mississippi River flows to the sea, we will never forget your generosity." She promoted awareness through recognition and reaffirmed her values by thanking the heroes whole heartedly. Then, Governor Blanco admitted her faults by using reluctant testimony. She explained how there were failures at every level of government and said, "as your governor, I take full responsibility." Speaking against her self interest by being honest helped her establish honorable character and strengthen her ethos. She then proceeded on becoming inspirational. She explains, "together we will all transform despair into hope and show the world the true meaning of determination... New Orleans may be ravaged but our spirit remains intact." She reestablishes pride within the Louisiana community proving once more that the people of Louisiana are resilient and brave. At the highest point of her speech, governor Blanco aroused the audience's emotions and feelings. She explains, "To anyone who even suggests that this great city should not be rebuilt, hear this and hear it well: WE WILL REBUILD." ...read more.

She was sincere and her personal commitment became beyond question. Governor Kathleen Blanco was persuasive in her address to rebuild New Orleans. Her speech takes on a motivated sequence design. She aroused attention by using real life experiences and explained Louisiana's current situation. She demonstrated an urgent need by explaining the effects left by Katrina. She magnified her need by stating, "The destruction is almost beyond comprehension." Strong evidence satisfied her need and provoked the audience to accept her plea for aid. She used imaginative language to illustrate positive results. She explained how Louisiana will drain water from communities, how they will clean up debris and garbage, how they will rebuild infrastructures ruined by Katrina, and how they will restore the economy of southeast Louisiana to bring residents home. She promised that Louisiana will be rebuilt better than ever. In her call for action, Blanco asked the government to cover 100% of what Louisiana will spend on the disaster. The audience showed their affirmation with applause. Governor Kathleen Blanco's speech motivated her listeners to accept her plan to rebuild Louisiana. She became a positive and respected role model because of her speech, but mostly because of her love and pride for Louisiana. ?? ?? ?? ?? 5 ...read more.