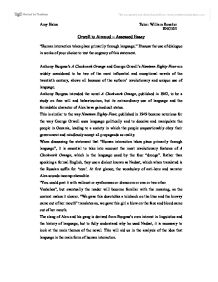 &quot;Human interaction takes place primarily through language.&quot; Discuss the use of dialogue in works of your choice to test the cogency of this statement.

Orwell to Atwood - Assessed Essay "Human interaction takes place primarily through language." Discuss the use of dialogue in works of your choice to test the cogency of this statement. Anthony Burgess's A Clockwork Orange and George Orwell's Nineteen Eighty-Four are widely considered to be two of the most influential and exceptional novels of the twentieth century, above all because of the authors' revolutionary and unique use of language. Anthony Burgess intended the novel A Clockwork Orange, published in 1962, to be a study on free will and behaviourism, but its extraordinary use of language and the formidable character of Alex have gained cult status. This is similar to the way Nineteen Eighty-Four, published in 1949 became notorious for the way George Orwell uses language politically and to deceive and manipulate the people in Oceania, leading to a society in which the people unquestionably obey their government and mindlessly accept all propaganda as reality. When discussing the statement that "Human interaction takes place primarily through language", it is essential to take into account the most revolutionary features of A Clockwork Orange, which is the language used by the four "droogs". Rather than speaking a formal English, they use a dialect known as Nadsat, which when translated is the Russian suffix for 'teen'. At first glance, the vocabulary of anti-hero and narrator Alex sounds incomprehensible: "You could peet it with vellocet or synthemesc or drencrom or ...read more.

In Part One, Chapter Five, Deltoid's habit of answering with "Yes?" seems almost like an invitation to exercise free will. Deltoid is asking for affirmation, just as the "eh" from the opening lines of each part is an offer for Alex to make his own choices. However, when Alex uses it with friends, his tone of "Yes?" is more commanding, as he does not want his friends to exercise free will as much as he does. This is a simple example of the way language is used as the primary form of human interaction and a way for Burgess to imply connotations through speech, and therefore convey his message. Nadsat demonstrates these ideas, for example, we learn in Part One, Chapter Five, from the sentence "Pete had given old Dim the soviet not to uncoil the oozy" that "soviet" means "order". Ironically, the 'droogs' had just expressed their desire for the gang to be more democratic, yet orders are still given. Here, the word "soviet" also relates to Burgess's views of soviet communism and the rigid hierarchies of power that the corrupt system had behind its fa�ade of equality. Language, in this instance has hidden connotations but still is the primary form of human interaction, as it aims to convey a message. At the beginning of each section, the phrase: "So what's it going to be then, eh?" ...read more.

between language and consciousness. As seen in Nineteen Eighty-Four, when words that describe a particular thought are completely absent from a language, that thought becomes more and more difficult to communicate and think of. For the Inner Party, the goal is to impose an orthodox reality and make heretical thought ('thoughtcrime') impossible. "In the end we shall make thoughtcrime literally impossible" explains the Newspaek engineer "because there will be no words in which to express it". By design, Newspeak narrows the range of thought and shortens people's memories. It is therefore ideal for a totalitarian system, in which the government has to rely on a passive public, which lacks independent thought and which has a great tolerance for mistakes both past and present. "To expand language is to expand the ability to think" (Myers, 1986: 353) While language in the traditional sense can expand horizons and improve our understanding of the world, Orwell's novel demonstrates that language, when used in a maliciously political way, can just as easily become "a plot against human consciousness" (Rahv, 1988: 182) After discussing the use of dialogue and language in Burgess's A Closkwork Orange and Orwell's Nineteen Eighty-Four, it is clear that human interaction does take place primarily through language. Burgess and Orwell use language in unique and revolutionary ways, to highlight its significant impact on society and the way the restriction of language use can completely change and inhibit human interaction. Amy Hales Tutor: William Rossiter ENG105 ...read more.