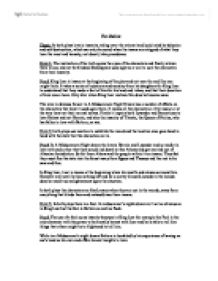 In both plays love is insanity, taking over the rational and lucid mind by delusion and self-destruction, which can only be cured when the insane are stripped of what they love the most and honesty, not deceit, take precedence.

Plot Outline Thesis: In both plays love is insanity, taking over the rational and lucid mind by delusion and self-destruction, which can only be cured when the insane are stripped of what they love the most and honesty, not deceit, take precedence. Point 1: The realization of the truth opens the eyes of the characters and finally allows them to see, and not be blinded. Shakespeare uses sight as a tool to cure the characters from their insanity. Proof: King Lear is insane at the beginning of the play and not near the end like one might think. It takes a series of rejections and scrutiny from his daughters for King Lear to understand that they made a fool of him for his land and riches, and that their devotion of love was a hoax. Only later when King Lear realizes this does he become sane. The love in idleness flower in A Midsummers Night Dream has a number of effects on the characters that have it used upon them. It makes all the characters a little insane or at the very least not their normal selves. Firstly it impairs both Lysander and Demetrious to love Helena and not Hermia, and also the insanity of Titantia, the Queen of Fairies, who has fallen in love with Bottom, an a*s. Point 2: both plays use location to establish the mood and the location also goes hand in hand with the state that the characters are in. Proof: In A Midsummers Night dream the lovers Hermia and Lysander and so madly in love with each other that they would risk death to flee Athens and get married out of Athenian Jurisdiction. ...read more.

Oberon also uses the spell on Titania who is the Queen of Fairies. He does this to get a hold of a young boy, which he wants for himself. When Titania wakes she sees Nick Bottom, however Puck has turned his head into and a*s's head and so Hermia falls in love with an a*s. Again it seems like absolute madness that a Queen of Fairies would fall in love with any mortal, let alone one with an a*s's head. Oberon uses this to his advantage and Titania gives up the boy without any resistance. When the spell is lifted Titania realizes she does not love that a*s and fall back in love with Oberon. The Love in Idleness spell turns out to be a key element in removing the tension and madness because there is no longer any conflict. Hermia and Lysander are allowed to wed; Demetrious no longer peruses Hermia and weds Helena (which it can also be argued is the one he originally loved because he slept with Helena before the play took place) and Oberon gets the boy he wanted and Titania's love once more. At the Beginning of King Lear the first act takes place in Lear's kingdom, with all of his wealth and people surrounding him as well as his three daughters. It is these surroundings, that specific location and the people around him, which was one of the reasons (outside of his natural attitude) for his madness. Lear felt that he was an incredibly noble and successful man, that he led a great life and achieved a lot, and as a gift to his three daughters he would distribute this wealth of land between the three. ...read more.

In Act IV when Bottom loses the spell of having an a*s's head he makes an insightful observation about his dream, which was really the effect of the Love in Idleness spell. He ends by saying "It shall be called 'Bottom's Dream,' because it hath no bottom" (Bottom Act 4.1 line 214). He is describing how deep and real his dream was to him, as if it actually happened and that there and the dream never ended. The key theme in both King Lear and A Midsummers Night Dream is Love, and love, if left to linger can lead to insanity. This was the case with both plays. In King Lear, Lear himself went mad because of the love and devotion he had for his daughters that he so longed in return. The ironic thing is he had that love the whole time however he was to blind and insane to recognize that. It was his wealth and success that made him blind and his peers, especially his daughters saw this and took advantage of it. In A Midsummers Nights Dream the young were mad with love and felt they had to escape Athens to pursue that love. Shakespeare only made this more complicated for them by adding the Love in Idleness spell to confuse the lovers. The same tool used to cause chaos however resulted in a happy ending for everyone as all the problems which were introduced at the beginning of the play were solved as a result of that same spell that made things complicated. William Shakespeare is a master at creating conflict which is obvious in every one of his plays, its how he subtlety creates solutions for these problems that make his work so intriguing, and King Lear and A Midsummers Night Dream are some of the best examples of this. ...read more.