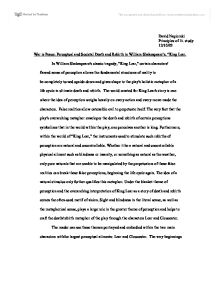 David Napiorski Principles of lit. study 12/10/03 War is Peace: Perceptual and Societal Death and Rebirth in William Shakespeare's, "King Lear. In William Shakespeare's classic tragedy, "King Lear," certain characters' flawed sense of perception allows the fundamental structures of reality to be completely turned upside-down and gives shape to the play's holistic metaphor of a life cycle in ultimate death and rebirth. The world created for King Lear's story is one where the idea of perception weighs heavily on every action and every move made the characters. False realities allow ostensible evil to perpetuate itself. The very fact that the play's overarching metaphor envelopes the death and rebirth of certain perceptions symbolizes that in the world within the play, one perceives another is king. Furthermore, within the world of "King Lear," the instruments used to stimulate such rebirths of perception are natural and uncontrollable. Whether it be a natural and uncontrollable physical ailment such as blindness or insanity, or something as natural as the weather, only pure naturals that are unable to be manipulated by the perpetuators of these false realities can break these false perceptions, beginning the life cycle again. The idea of a natural stimulus only further qualifies this metaphor. Under the blanket theme of perception and the overarching interpretation of King Lear as a story of death and rebirth comes the often-used motif of vision. Sight and blindness in the literal sense, as well as the metaphorical sense, plays a large role in the greater theme of perception and helps to craft the death/rebirth metaphor of the play through the characters Lear and Gloucester. The reader can see these themes portrayed and embodied within the two main characters withthe largest perceptual ailments: Lear and Gloucester. The very beginnings of Lear's false reality start to aggravate him from the start of the play. In Act 1, Scene 1 Lear divides his kingdom among his two obedient daughters, Goneril and Regan. ...read more.

Edgar, in this play, represents a normative figure - a figure of love and loyalty that is represented in the world of the play as something natural. Lear rests in the arms of such a character and is carried to the city of Dover, the literal edge of England, looking out onto the ocean. At these natural boundaries, they have reached the metaphorical edge of sanity and where they will both begin again. The journey continues to bring Lear to Cordelia, the figure of honesty and forgiveness in the play, who is also the representation of the edge of truth and the possibility for new life. In Act 3, Scene 6 Lear, in his incredible madness, puts Goneril and Regan on trial in his mind for their outrageous betrayal, showing an acceptance of a very sane truth, albeit taking an insane road to get there. But, in Lear's world, the natural ailment of insanity is part of the means that breaks the somewhat unnatural false reality he'd been living in, perpetuated by the warped perceptions of his surroundings. At the end of Act Three, Lear can see again. In Edgar's arms en route to Dover, he can truly see that what is happening is real, and he understands the reasons for these occurrences. Lear exclaims, "...Draw the curtains./ So, so, we'll go to supper I' th'/ morning (III.vi. 89-90)." Here he validates the end of a scene, so to speak, as his own battle has ended. In Act Four, the motif of vision and sight shape the theme of perception an incredible level through the characters Gloucester and Edgar. The idea of perception helping to make the overall theme of death and rebirth in the play is extremely apparent in act 4, scene 6. Earlier in the act, Gloucester is literally blinded by the Duke of Cornwall, Goneril and Regan at the orders of his son, Edmund for his 'treason' in helping Lear. ...read more.

War is shown to change perception and shed light where darkness lies and to stimulate the societal cycle of a complete rebirth of values, ethics and politics. The idea of literal and metaphorical vision and sight in terms of perception helps to absolutely shape the overarching death/rebirth metaphor at work in "King Lear" as we can see by exploring the language within the text itself. Through Lear and Gloucester's characters we see how literal sight coincides with metaphorical sight and how their individual perceptions alter in co ordinance with their individual rebirths. We also see how they, in turn, play a significant role in the ultimate death and rebirth of society and the world created within the play itself. The idea of war, battle, and correspondence plays a large role in shaping the play's overall metaphor as well, but those themes also overlap with the larger theme of one's perceptions and false realities along with the idea that only pure naturals yield the power to change these perceptions or crack the aforementioned false realities. "King Lear," as a play, explores many aspects of the human mind, and, as it could be argued to be Shakespeare's most perceptually based work it is way ahead of its time. Although one might literally be able to see what is apparent, directly in front of their eyes, they may falter in seeing truth in a situation, and as seen through Gloucester's rebirth, this idea works both ways. The play as a whole makes the idea of perception an extremely important one as it is the thread that connects motif to metaphor in more than one sense. The society within the play can be seen as almost allegorical, or at least bearing some connection to the reality we live in as it is quite cyclic. The fact that these seemingly cyclical motifs within the play help to shape the overall metaphor of a cycle itself, whatever it may be, may lead the reader to look at the cycles in his or her own life and to see the overriding truth that seeps out of William Shakespeare's, "King Lear." ...read more.