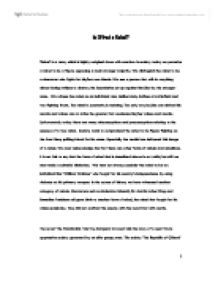 Is Offred a Rebel?

Is Offred a Rebel? 'Rebel' is a term, which is highly weighed down with emotion. In society today we perceive a rebel to be a figure opposing a much stronger majority. We distinguish the rebel to be a character who fights for his/her own ideals. We see a person that will do anything almost being ruthless to destroy the boundaries set up against him/her by the stronger mass. We witness the rebel as an individual who deliberately defines a battlefield and two fighting fronts. The rebel is constantly is resisting. The only way he/she can defend his morals and values are to strike the greater that condemns his/her values and morals. Unfortunately today there are many misconceptions and preconceptions relating to the essence of a true rebel. Society tends to comprehend the rebel to be figure fighting on the front lines, spilling blood for his cause. Especially the media has delivered this image of a rebel. We must acknowledge the fact there are other forms of rebels and rebellions. It is not fair to say that the form of rebel that is described above is not valid, but still we must make a suitable distinction. We must not always consider the rebel to be an individual like 'William Wallace' who fought for his country's independence by using violence as his primary weapon. In the course of history we have witnessed another category of rebels. Characters such as Mahatma Ghandi, Dr. Martin Luther King and Emmeline Pankhurst all gave birth to another form of rebel, the rebel that fought for his values passively. ...read more.

Offred also claims the need to do things but never does them. An excellent example of this is at the end of the book: 'I could scream now, cling to the banister, relinquish dignity. I could stop them at least for a moment.' Offred always wishes to do something but she never does. This is not the characteristic of a true and active rebel. A true rebel does what she wants to. After Ofglen's suicide Offred feels happy that it is not she that is dead. Offred is grateful that Ofglen dies for the 'Mayday' purely because it is not she. I feel that this behaviour is not the behaviour of a true rebel. It is legitimate to say that Offred lacks the qualities of a true active rebel. There are only a few occasions where she becomes active. I feel that the scene that reflects this aspect of Offred's character most effectively is when Offred asks the new the Ofglen about 'Mayday'. It is at this point Offred lets go of all her fears. I feel that intrepidness is a vital quality of a rebel's character. Offred's active rebellion also shows its forms when Offred steals the flower. In this fundamentalist Christian society stealing is a great sin. Stealing in general is always forbidden. By stealing Offred destroys another barrier that keeps her imprisoned. This again is emphasised by her illegal relationship with Nick. I feel that it is not Offred's active part of her rebellion that captures my interest I feel that Offred's passive rebellion is a revolt that requires much emotion and strength. ...read more.

When the 'Angels' come to collect Offred she leaves the house with great dignity and honour. She maybe feeling torn up on the inside but she does not expose it. It is also remarkable how she does not fear the moment after evaluating the situation. The historical notes offer us proof that Offred's struggles do pay off even if she never got to see the brighter day. Her tapes proved, that by maintaining her own identity she was able to move on and tell her story. Even if she never got to witness the fall of Gilead she proved that they couldn't make her fall. They could not eliminate Offred. They failed to shut her mouth. Offred spoke out against them in the loudest voice possible. Offred's cassettes did more than just speak her voice. I feel that the true reason why Offred did not assign her name is because she wanted to speak universally. Offred wanted to speak in the name of all handmaids. In studying Offred's rebellion we can see that she suffered an internal conflict. Offred's plight is always human as well as ideological. She wanted to rebel but at the same time she was scared of loosing herself in the process. Offred had to win the conflict within her before she could start the external battle. Offred won this conflict and decided that her humanity was the risk for a great cause, love. 'As long as women consent to be unjustly governed, they will be; but directly women say: "We withhold our consent," we will not be governed any longer as long as government is unjust.' Emmeline Pankhurst (1858- 1928) 1 ...read more.