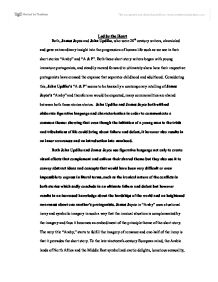 Led by the Heart

Led by the Heart Both, James Joyce and John Updike, who were 20th century writers, chronicled and gave extraordinary insight into the progression of human life such as we see in their short stories "Araby" and "A & P". Both these short story writers began with young immature protagonists, and steadily moved forward to ultimately show how their respective protagonists have crossed the expanse that separates childhood and adulthood. Considering this, John Updike's "A & P" seems to be basically a contemporary retelling of James Joyce's "Araby" and therefore as would be expected, many commonalities are shared between both these stories stories. John Updike and James Joyce both utilized elaborate figurative language and characterization in order to communicate a common theme: showing that even though the initiation of a young man to the trials and tribulations of life could bring about failure and defeat, it however also results in an inner awareness and an introduction into manhood. Both John Updike and James Joyce use figurative language not only to create visual effects that complement and enliven their shared theme but they also use it to convey abstract ideas and concepts that would have been very difficult or even impossible to express in literal terms, such as the ironical nature of the conflicts in both stories which sadly conclude in an ultimate failure and defeat but however results in an increased knowledge about the hardships of the world and an heightened awareness about one another's protagonists. ...read more.

Updike's simplistic colloquial descriptive words used by Sammy, such as " sweet broad soft-looking can" (802), "Queenie" (804) and "nubbled pink top" (804), all allow Updike not only to portray Sammy as a stereotypical teenager in terms of his behavior and attitude but also allows him to evoke a sensory impression of affection and romance. In a vague sense of idealism Sammy attempts to become an "unsuspected hero" (805) and attempts to stand up and impress the girls, who at the climax of the situational irony "keep right on going ... [and] they flicker across the lot to their car" (805). Sammy's rash and impractical behavior only brings about his unnecessary self-sacrifice for three girls who he will never meet again and Updike concludes like Joyce with a moment of self-realization as Sammy comprehends "how hard the world was going to be to [him] hereafter" (805). Even though Updike has made it so, that the result of the situation is the opposite of what was intended or expected he has also emphasized how Sammy has gone past the disillusionment of the situation and has traversed beyond his immature teenage ways and has discovered who he truly is. James Joyce and John Updike similarly utilize characterization in order to emphasize on the intricacies, feelings and actions of their respective boyhood protagonists in order to embody and emphasize their common theme. ...read more.

and had no problem "watch[ing] them all the way" (803). However Updike's characterization of Sammy at the end is most masterful of all. He in one sense continues to uphold Sammy's adolescent behavior when all the time his intentions is to do everything in his power to impress the girls, making sure that they would not leave without having some sort of awe-filled reverence for him. But as the girls "flicker across the lot to their car" (805) Updike begins to show Sammy's torturous progression to adulthood as he refuses to back down and risks doing stuff that his "family says [is] sad" (804) even though he doesn't "think it's so sad [him] self" (804). Updike and Joyce's characterization of their respective protagonists and the resolution of their internal conflicts show the reader the self-awareness and the significant step toward adulthood both boys have taken after briefly experiencing the trials and tribulations of real life Therefore in retrospect we see how James Joyce in "Araby" and John Updike in "A & P" are both able to chronicle the progression of human life from childhood and immaturity to adulthood and sensibility. Through similar uses of irony, imagery and characterization both these brilliant writers are able to highlight and emphasize their common theme about how the first steps toward adulthood, maturity and self-awakening may be the result of initial failure and defeat due to one's first encounters with the cruelty and viciousness of real life. "Araby" and "A & P" therefore are both testaments to the saying "from adversity comes renewed strength." ...read more.