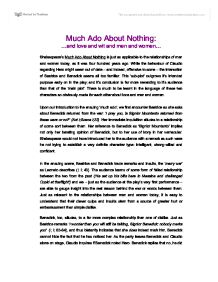 Much Ado About Nothing: ...and love and wit and men and women... Shakespeare's Much Ado About Nothing is just as applicable to the relationships of men and women today, as it was four hundred years ago. While the behaviour of Claudio regarding Hero might seem out of date - and indeed, offensive to some - the interaction of Beatrice and Benedick seems all too familiar. This 'sub-plot' outgrows it's intended purpose early on in the play; and it's conclusion is far more rewarding to it's audience than that of the 'main plot'. There is much to be learnt in the language of these two characters so obviously made for each other about love and men and women. Upon our introduction to the ensuing 'much ado', we first encounter Beatrice as she asks about Benedick returned from the war: 'I pray you, is Signior Mountanto returned from these wars or no?' (Act I;Scene i;22) Her immediate inquisition alludes to a relationship of some sort between them. Her reference to Benedick as 'Signior Mountanto' implies not only her berating opinion of Benedick, but to her use of irony in her vernacular. Shakespeare would not have introduced her to the audience with a remark as such were he not trying to establish a very definite character type: intelligent, strong-willed and confident. In the ensuing scene, Beatrice and Benedick trade remarks and insults, the 'merry war' as Leonato describes (I; i; 43). ...read more.

Here are two characters, strong minded, single and yet perfectly content to remain so. In fact, it would seem both regard marriage as an end to independence: Benedick as an end to the life of an irresponsible bachelor, as we can assume he played this role in a previous relationship with Beatrice, and Beatrice as an end to her condemnation of the role of women in society. (A perfect example would be the manner in which Hero is expected to accept the proposal of any man, be it the Prince or Claudio, upon her father's orders.) T first words of truth are spoken by Beatrice as she exclaims 'Good lord, for Alliance. Thus goes everyone to the world but I, and I am sun-burnt. I may sit in a corner, and cry heigh-ho for a husband.' (II;i;235-236) We know, as the audience, that this is a sentiment Beatrice is very familiar with. She does desire a husband, but it is clear to an audience that she does not seek the conventional husband either. If she did, she would have no qualms about an arranged marriage. She seems to be expressing the suppressed desires of love of most women in her society. As the rest of the characters mislead Beatrice and Benedick into believing each is too afraid to admit their true love for each other, the audience realises just how fragile, or fickle, the two characters really are. ...read more.

Each is afraid of love and commitment, albeit for slightly different reasons, which is clear due to the recurring theme of the different roles of men and women in society. Once Beatrice and Benedick realise someone exists to love them and for them to love, they are completely and immediately open to the idea of love. Theirs is a perfect match, emphasised by their verbal challenges and similar wit. Their 'merry war' is also a meeting of the minds, and the audience is certain of their happy, if volatile, future - ironically - because of this war of words. Beatrice and Benedick serve to prove that love comes in all forms, and that it is not only what we say or how we say it, but what we say when no one is around to hear it, and what we only ever say silently to ourselves. I applaud them for their anxiety and fear of love, so uncommon in the work of Shakespeare, as they provide an antithesis to the love that characters - Claudio and Hero, for example - so often fall pray to and we are not sure always survive. Their strength in words masks a fear of trust in others, and thus their relationship together seems a certainty in their futures. Truth in language and love triumph through these complex characters, and remind us of our fragile humanity. ...read more.