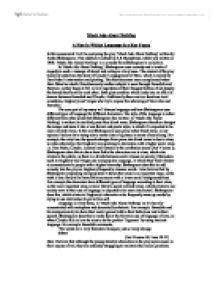 Much Ado About Nothing is a play in which language is a key focus.

Much Ado About Nothing A Play in Which Language is a Key Focus In this coursework I will be analysing the play 'Much Ado About Nothing' written by Arden Shakespeare. This addition is edited by A.R Humphreys, which was written in 1958. 'Much Ado About Nothing' is a comedy from Shakespeare's collection. In 'Much Ado About Nothing', Shakespeare uses comedy and a touch of tragedy to send a message of deceit and noting as a key issue. The content of the play basically underlines the story of Claudio's engagement of Hero, which is ruined by Don Pedro's intervention and plotting. This then becomes more complicated when Hero fakes her death. Simultaneously another subplot is seen through Benedick and Beatrice, as they begin to fall in love regardless of their frequent battles of wit despite the hatred they have for each other. Both plots combine which leads into an affair of honour between Benedick and Claudio. Additionally there are two facetious local constables, Dogberry and Verges who try to expose the scheming of Don John and Borachio. The core part of my essay will discuss language and how Shakespeare uses different types of language for different characters. The style of the language is rather different from other plays that Shakespeare has written: as 'Much Ado About Nothing' is written in one third prose then blank verse. Shakespeare therefore changes the tempo and turns it into a less formal and poetic style, in which it's expected to be more in blank verse. ...read more.

Claudio for publicly denouncing Hero. I believe that Shakespeare has built tough exterior shells for Beatrice and Benedick in which is shown when we are first introduced to the two characters, however Shakespeare lets us know that underneath they tough exterior they are weak and vulnerable human beings. Shakespeare in terms of displaying Benedick and Beatrice as the symbol of tamed savage animals represents the social timing that must occur for both souls to be ready to endure themselves to love and marriage. For example; Beatrice's pledge to endure to Benedick's love by; 'Taming my wild heart to thy loving hand, if thou dost love, my kindness shall incite thee to bind our loves up in a holy hand' (Act ??? scene ?, lines 112-114) This suggests that Benedick is to become her master. Shakespeare places a key focus in terms of language in lines 112-114, as it shows that Beatrice's character has been silent. He does this to show that even though Beatrice believes that she would always get the better over her. Also in the opening act, Claudio and Don Pedro tease Benedick about his animosity towards marriage and also comparing him to a wild animal. Don Pedro comments: 'In time the savage bull doth bear the yoke' (Act ? scene ?, lines 241-2) This explains that in time even the savage Benedick will surrender to the taming of love and marriage. Shakespeare does to show us that benedick's character will back down due to his affections and that now he's not fooling anybody by showing a tough side against love. ...read more.

This also supports my point as women in general are seen to have no authority in power and are s****l oppressed. I believe Shakespeare does this to show us what kind of society we live in as women are seen as the lower class of all. In my opinion the language is the key focus as language centres all the characters in the play, for example the extent of blank verse being used for all the characters even those with a lower socially class. I believe that the language used amongst the characters gives us an insight into their feelings and their personalities and how Shakespeare expresses them shows us what kind of person they are. In my opinion I believe that the way the characters talk to one another shows how Shakespeare wants to break down that social barrier between social classes. This is done effectively as we see in Act V scene ?; all people of different social class speak on the same level of language. In conclusion I have discussed language as a key focus in this play in terms of characters and Shakespeare expressing it. I prefer 'Much Ado About Nothing' as it leaves a moral message to play; it also gives us the idea of what a fun and perfect beginning can turn into a near tragic ending. Even though the play has a near tragic ending, it still gives an explanation of what noting, in terms of spying can lead to and not to always believe what you hear or see. ...read more.