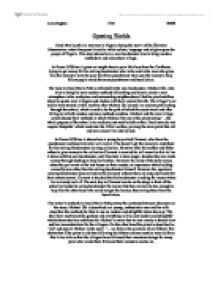 Opening Worlds Dead Man's path is a story set in Nigeria during the year's of the Christian Missionaries, when European's tried to inflict culture, language and religion upon the people of Nigeria. This story shows how a new headmaster tries to bring modern methods to and old cultural village. In Pieces Of Silver it gives an insight about a poor little boy from the Caribbean trying to get money for his retiring headmaster who in the end is the man who gives him the money to save the poor boy from punishment who uses the money to help fellow pupils avoid the same punishment and humiliation. The twist in Dead Man's Path is reflected by the new headmaster, Michael Obi, who tries to bring his new modern methods of teaching and tries to create a new atmosphere in his workplace and surrounding neighbourhood. But his plan backfires when he upsets local villagers and clashes with their ancient beliefs. ...read more.

The next day as Clement awaits on the stage in front of the school he hands his acting headmaster the money but then realizes he has enough to help free the other boys who could not get the money, thus saving them from the humiliation. The writer's methods in Dead Man's Path portray the contrasts between characters in the story. Michael Obi is described as a young, enthusiastic man and his wife describes the methods he likes to use as modern and delightful when she says 'We shall have such beautiful gardens and everything will be just modern and delightful' which shows she has ambitions for Michael's career but are not exactly a shared view and her inconsideration for the villagers. On the other hand the priest is described as 'old' and says to Michael in the story '... we follow the practices of our fathers' this shows that if the priest is old then following his fathers actions must be very old from this it also tells us that the villagers have followed their ancestors doings for many years who would have followed their ancestors and so on. ...read more.

At the time of Dead Man's Path Nigerians would have found it hard to live in a society of clashing cultures because of the European Christian Missionaries disrupting the lifestyle of the country. Natives wouldn't have been able to life their life in the freedom they deserve and many changes would have led to deaths and wars in these parts of the countries which would have been a big shock to the young people inheriting their ancestors cultures but those cultures being altered by strangers. Also during the time Piece's Of Silver would have been written it shows how children's education was sacrificed for the sake of wealth and luxury and not caring about the psychological damage they are causing the children. Teachers were very few and far between back then as not many people were educated fully and the government were paying these teachers to share their knowledge with the pupils but took advantage and ran the school like a military camp. Liam Hughes 7104 39409 ...read more.