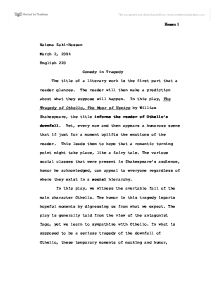 Othello. In this play, The Tragedy of Othello, The Moor of Venice by William Shakespeare, the title informs the reader of Othellos downfall. Yet, every now and then appears a humorous scene

Naiema Zaki-Hassan March 2, 2004 English 220 Comedy in Tragedy The title of a literary work is the first part that a reader glances. The reader will then make a prediction about what they suppose will happen. In this play, The Tragedy of Othello, The Moor of Venice by William Shakespeare, the title informs the reader of Othello's downfall. Yet, every now and then appears a humorous scene that if just for a moment uplifts the emotions of the reader. This leads them to hope that a romantic turning point might take place, like a fairy tale. The various social classes that were present in Shakespeare's audience, humor he acknowledged, can appeal to everyone regardless of where they exist in a social hierarchy. ...read more.

If the readers are misdirected, they are in for a big surprise. What may deviate the reader is that unlike many tragedies Othello's destiny was not up to the will of the gods. In this tragedy there was not a god or force to challenge, only Iago. He had a chance to turn everything around as we all hoped, but he did not. Amidst all of the unfortunate scenes leading to the fall of Othello, there are scenes that create a more positive atmosphere than just an all around serious tragedy. A reader, who recognizes that destiny is in Othello's hands in addition to humorous moments, will believe that the play might be headed for a different direction. ...read more.

lips; then laid his leg over my thigh, and sighed and kissed, and cried 'Cursed fate that gave thee to the moor." Playing out this scene, I imagine Iago trying to act it out using different voices, as Othello foolishly takes it all in. To some extent Othello's naivety is so extreme it becomes humorous. Shakespeare gave the ending away in the title. Therefore, adding humor gives the reader a sense of hope that maybe it is not such a serious tragedy and things might turn out differently. As for the audience, everyone is always looking for comfort regardless of status; we are always looking for those comforting, soothing parts as much as we all enjoy a sad story. ?? ?? ?? ?? Hassan 1 ...read more.