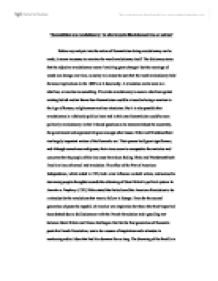 'Romanticism was revolutionary.' In what ways is this statement true or untrue?

'Romanticism was revolutionary.' In what ways is this statement true or untrue? Before any analysis into the notion of Romanticism being revolutionary can be made, it seems necessary to examine the word revolutionary itself. The dictionary states that the adjective revolutionary means 'involving great changes' but the meanings of words can change over time, so surely we cannot be sure that the word revolutionary held the same implications in the 1800's as it does today. A revolution can be seen as a rebellion, or reaction to something. If we take revolutionary to mean a rebellion against existing beliefs and art forms then Romanticism could be viewed as being a reaction to the Age of Reason, enlightenment and neo-classicism. But it is also possible that revolutionary is a distinctly political term and in this case Romanticism could be seen politically revolutionary in that it forced questions to be answered about the monarchy, the government and organised religion amongst other issues. Blake and Wordsworth are two hugely important writers of the Romantic era. Their poems hold great significance, and although sometimes ambiguous, their views seem to encapsulate the anxieties and concerns that the people of this time must have been feeling. Blake and Wordsworth both lived in a time of turmoil and revolution. The effect of the War of American Independence, which ended in 1783, had a clear influence on both writers, and seemed to turn many peoples thoughts towards the reforming of Great Britain's political system. In America a Prophecy (1793) Blake stated that he believed the American Revolution to be a stimulus for the revolutions that were to follow in Europe. Even for the second generation of poets the republic of America was inspiration for them after their hopes had been dashed due to disillusionment with the French Revolution and a gruelling war between Great Britain and France had begun. But for the first generation of Romantic poets the French Revolution, was to be a source of inspiration and a stimulus in awakening radical ideas that had lain dormant for so long. ...read more.

(Wu, p.77, line 20) This quotation seems to highlight Blake's trouble in understanding how the God presented in Songs of Innocence could create the miseries and contradictions that our attention is drawn to in Songs of Experience. Blake's dislike of organised religion led him to design his own mythology, based upon the bible and Greek mythology. His personal religion was founded on a pre-Jesus revelation and the joy of man. Blake's daring subject matter and strong political and religious opinions were certainly revolutionary in the sense that previous literature had never been quite so challenging and uncomfortable to read, this draws attention to another revolutionary aspect of Romanticism. If we take revolutionary to imply a rebellion against something or a new approach then Romanticism can be seen as a rebellion of the age of reason and neo-classicism. The Age of Reason which put emphasis upon science and rational thought can be identified as beginning in roughly 1650 and ending around the turn of the nineteenth century, Romanticism was moving away from this notion of 'reason' towards 'feeling' which Romantic thinkers such as Blake and Wordsworth saw as a stronger expression of what or who we really are. Both writers associated reason with the commercial city, which they distrusted; this is because they felt that it represents artificiality, which hides us from our deeper selves. The solution in obtaining our deeper selves is to return to nature and the freedom of childhood. The writing of Romanticism also provided a systematic contrast with the norms of Versailles neo-classicism due to the displacement of reason by the imagination and a change of subject matter to human behaviour and it's universal aspects rather than individual manifestations of human activity. It wasn't that Romantic writers rejected the literature of the classics, instead the literature of the middle ages and the baroque were embraced, literature that had been dismissed by neo-classicists. ...read more.

Although Wordsworth's work was written in a language really used by men it is unlikely that the working classes would be able to attain such literature easily due to it's price unless like Paine's article cheap editions were produced. Despite this though Romantic writers still regocnised that their task was the spreading of ideas and consequently the changing of minds. Wordsworth himself said that: 'Every great and original writer, in proportion as he is great or original, must himself create the taste by which is is to be relished' 5 Blake seconded this notion and said himself that he believed one of poetry's fuctions to be releasing people's minds from their 'mind-forg'd manacles'. In A Defence of Poetry Shelley wrote that one of the great powers possessed by poets is keeping open a sense of alternative possibility, therefore he went on to argue that in this sense all poets are politically progressive, whatever their ostensible political beliefs. It is tricky to assess fully whether poetry produced in the Romantic period was revolutionary, but surely the poetry can still have a revolutionary impact on even a modern day society as some of the issues addressed in the literature such as nature, childhood and the effect of religion and advancing technology are still very much relevant today and indeed are likely to be in the future. But it must not be forgotten that although this essay has focused on a very small section of the poetry of the Romantic era, and therefore it is difficult and dangerous to make assumptions about other Romantic writers without analysis of their work. It is also important to remember that Romanticism does not just refer to literature; Romanticism also saw transformations in art, sculpture, music, criticism, historiography and architecture, all of which underwent great and new changes, not just in Great Britain but in Western civilisation. The effects and influences of the Romantic era are all around us, and the impact of incredible writers such as Wordsworth and Blake has left a permanent and profound mark on the world of literature. ...read more.