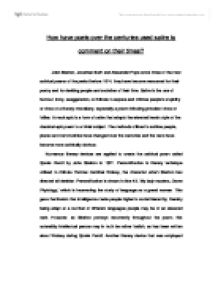 How have poets over the centuries used satire to comment on their times? John Skelton, Jonathan Swift and Alexander Pope wrote three of the most satirical poems of the period before 1914, they have become renowned for their poetry and for deriding people and societies of their time. Satire is the use of humour, irony, exaggeration, or ridicule to expose and criticize people's stupidity or vices or a literary miscellany, especially a poem ridiculing prevalent vices or follies. A mock epic is a form of satire that adapts the elevated heroic style of the classical epic poem to a trivial subject. The methods utilised to satirise people, places and communities have changed over the centuries and the texts have become more satirically obvious. Numerous literary devices are applied to create the satirical poem called Speke Parott by John Skelton in 1521. Personification is literary technique utilised to ridicule Thomas Cardinal Wolsey, the character whom Skelton has directed all derision. Personification is shown in line 43, 'My lady masters, Dame Phylology,' which is incarnating the study of language as a grand woman. This gave the illusion that intelligence made people higher is social hierarchy; thereby being adept at a number of different languages people may be of an elevated rank. However, as Skelton portrays recurrently throughout the poem, this ostensibly intellectual person may in truth be rather foolish, as has been written about Wolsey during Speke Parott. ...read more.

Line 2, 'By haughty Celia spent in Dressing;' and he also uses 'Betty' the generic name for a maidservant by applying these names within the poem, the illusion of romance and love is created, which is very shortly wholly contradicted. However, Strephon is not a true hero and this is made truly clear by connoting Strephon as a dog. 'Or greasy Coifs and Pinners reeking,' is a example of when Strephon comes across a smell he does not enjoy, this quotation is informing the audience that Celia's nightcaps are so oleaginous that they are beginning to have a disgusting odour. In The Lady's Dressing Room, Jonathan Swift revealed human imperfection and cosmetic vanity as the evil he would attack in The Lady's Dressing Room. He chooses intentionally crude humour in an attempt to force the 'truth' upon his readers as he wished for his audience to understand the vain state of the world they subsisted within. His style reflected the intensity of his social criticism and his disregard for his surrounding environments customs and beliefs. Jonathan Swift commonly utilises the indication of layering within The Lady's Dressing Room. This idea creates the illusion of revulsion much more comprehensibly in the reader's mind. 'Begumm'd, bematter', and beslim'd ... With Dirt, and Sweat, and Ear- Wax grim'd.' Alliteration and the semblance of contributing nastiness are seen in this quotation. ...read more.

Certainly he has some interest in flattering Arabella Fermor, the real-life woman on whom Belinda is based; in order for his poem to achieve the desired reconciliation, it must not offend. Pope also exhibits his appreciation for the ways in which physical beauty is an art form: he recognizes, with a mixture of censure and awe, the fact that Belinda's legendary locks of hair, which appear so natural and spontaneous, are actually a carefully contrived effect. In this, the mysteries of the lady's dressing table are similar, perhaps, to Alexander Pope's own literary ability, which he describes elsewhere as 'nature to advantage dress'd.' An alternative literary device is the reference to the epic: Iliad, Aeneid, where each epic part has a reference to the mock epic segment. The characteristics of an epic are the invocation of a deity, a regular statement of theme, the division of the work into books and cantos, ostentatious speeches, battles and supernatural machinery; to reveal the absurdity of a certain subject. The main consequence of utilising the style of an epic is, however, not so much to have fun with the epic, but to deflate a subject or characters that by contrast appear exceptionally insignificant. Between Iliad and The Rape of the Lock there are numerous similarities including the arming of the hero with the toilet (dressing) scene; the battle with the card game; the stratagem with the pinch of snuff; the meddling Gods and Goddesses with the Sylphs and Gnomes; the journey to the underworld with the cave of Spleen and the dream with the dream. ...read more.