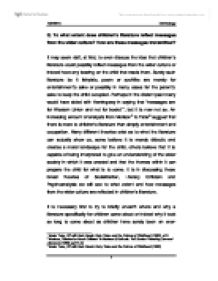 To what extent does children's literature reflect messages from the wider culture? How are these messages transmitted?

Q. To what extent does children's literature reflect messages from the wider culture? How are these messages transmitted? It may seem daft, at first, to even discuss the idea that children's literature could possibly reflect messages from the wider culture or indeed have any bearing on the child that reads them. Surely such literature be it fairytale, poem or suchlike are merely for entertainment's sake or possibly in many cases for the parent's sake to keep the child occupied. Perhaps in the distant past many would have sided with Hemingway in saying that "messages are for Western Union and not for books"1, but it is now not so. An increasing amount of analysts from Morison2 to Tatar3 suggest that there is more to children's literature than simply entertainment and occupation. Many different theories exist as to what the literature can actually show us, some believe it is merely didactic and creates a moral landscape for the child, others believe that it is capable of being interpreted to give an understanding of the wider society in which it was created and that the themes within it can prepare the child for what is to come. It is in discussing these broad theories of Socialization, Literary Criticism and Psychoanalysis we will see to what extent and how messages from the wider culture are reflected in children's literature. It is necessary first to try to briefly unearth where and why a literature specifically for children came about or indeed why it took so long to come about as children have surely been an ever-present commodity. Philippe Ari�s's Centuries of Childhood claims that before the early modern era "the idea of childhood did not exist". ...read more.

Bob Dixon in his piece Catching them Young enlists many examples of such portrayals. As the title of the piece suggests he hunts out r****t, s****t and class values within children books that are indeed catching children young and laying out in their mind the way "things should be" so to speak. His many examples include the mass of s****t on goings in the Pony Parade series, Noddy's assault by the wicked golliwogs and the snobbery of Rev. W. Awdry's branch line. I think particular attention should be paid here to the issue of the s****t values, which many of the books portrayed. As Cadogan and Craig put it "before girls are old enough to go to school they are familiar with Polly Flinders, who is whipped for spoiling her nice, new, feminine clothes, with the other Polly who is encouraged endlessly to put the kettle on and take it off again; they learn that Miss Muffet has an irrational fear of spiders, and see how the little girls who are kissed and reduced to tears by the offensive Georgie-Porgie lack the courage to chase him off, and have to wait until the "boys" come out to rescue them"13. Though to female readers it may seem ludicrous for us to say that this is why little girls are little girls, as they now see themselves in the "girl-power" mode, perhaps this was indeed the case. Girls in this literature were often given passive verbs for example Jane would watch but John he would jump or run. John (typical boy) in our example was outgoing and he was ready to act upon the world but Jane (typical girl) ...read more.

Victorian girls were catered for by stories such as Louisa May Alcott's Little Woman (1868), which detailed domestic dramas. Colin Mc Naughton's Watch out for the Giant Killers (1992) and Jan Needle's The Bogeymen (1992) are concerned with ecological awareness and anti-r****m respectively and are framed in a time when this was big news. These are just but a few examples of such literature as there is no doubt many exist. This idea of message-encoded children's literature is not a thing of the past by any stretch of the imagination. Granted many of the examples given are from past times but this is due to research that has been carried out. The themes portrayed in JK Rowling's Harry Potter are no less didactic than any of the tales, which emerged in the late eighteenth century. Indeed the morals which are readily given out by such protagonists as Captain Planet or He-man in their comics of the same name are equal to if not more moralistic than any of the past examples given. It is clear to see that since children's literature became big business and perhaps even before this time it has been heavily laden with messages from the wider society but confined by words there has only been time for a mere taste. It is by no coincidence that Bettleheim purports that a person's favourite fairytale can reflect their life and their insecurities. This seems to throw the question of, are adults manipulating children manipulating children?, up for discussion. This literature is written, edited, published, selected and often read by adults so therefore they can make their children read whatever they want them to in a form of indoctrination if that is not too strong a word. As G.K. Chesterton was in doubt that "my first and last philosophy, that which I believe in with unbroken certainty, I learnt in nursery". ...read more.