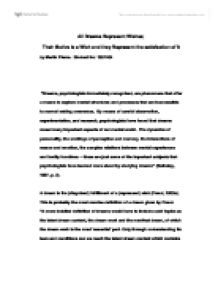 We shall now attempt to explain the three main parts of a dream in reverse to the order in which they occur in the mind, but in the order that we become consciously aware of them. The Manifest dream

All Dreams Represent Wishes; Their Motive is a Wish and they Represent the satisfaction of It by Martin Pierce. Student No: 1057404 "Dreams, psychologists immediately recognized, are phenomena that offer a means to explore mental structures and processes that are inaccessible to normal waking awareness. By means of careful observation, experimentation, and research, psychologists have found that dreams reveal many important aspects of our mental world. The dynamics of personality, the workings of perception and memory, the interactions of reason and emotion, the complex relations between mental experiences and bodily functions -- these are just some of the important subjects that psychologists have learned more about by studying dreams" (Bulkeley, 1997, p. 2). A dream is the (disguised) fulfillment of a (repressed) wish (Freud, 1900a). This is probably the most concise definition of a dream given by Freud. "A more detailed definition of dreams would have to include such topics as the latent dream content, the dream work and the manifest dream, of which the dream-work is the most 'essential' part. Only through understanding its laws and conditions can we reach the latent dream content which contains the true and disguised wish. ...read more.

Condensation does not only relate to people however. It also occurs with objects and even thoughts. A good example of this is another of Freud's dreams The Botanical Monograph (Freud, 1900a, p. 254). An object in this dream, the "botanical monograph", caused Freud to travel along a path of associations, eventually arriving back at one of the unconscious wishes that gave this particular dream its psychical energy (Freud, 1900a). "Dreams frequently seem to have more than one meaning. Not only, as our examples have shown, may they include several wish fulfilments one alongside the other; but a succession of meanings or wish fulfilments may be superimposed on one another, the bottom one being the fulfilment of a wish dating from earliest childhood" (Freud, 1900a). Displacement is the process where by a psychically charged event or memory is removed from its original context and is adapted to fit into some other context. This other context is different or safe enough to provide distance from the original event. Through using displacement, painful or potentially harmful issues involving certain people or objects can be worked out in a dream using other less harmful or anxiety producing alternatives (Langs, 1988). ...read more.

28). It is that part of the dream which is hidden from us, and which contains the primary trigger for the dream, the unconscious and repressed wish, i.e. wishes that are prevented from reaching consciousness during waking life. The latent dream content may also contain preconscious material, these are the impressions of waking life that we have not taken conscious notice of during the day but which have retained some form of psychical energy and therefore arise in our dreams (Freud, 1900a). Also sensory or somatic stimuli experienced during the night can under certain conditions be brought into the dream. This only happens however if these stimuli are in accordance with the psychical sources of the dream i.e. the unconscious wish (Freud, 1900a). "Thus Freud maintained his theory that in 'the construction of dreams, the part of the catalyst is always played by the unconscious wish alone' (Freud, 1900a) it provides the psychical energy for the construction of the dream" (McLeod, 1992, p. 42). '...wishful impulses left over from conscious waking life must be relegated to a secondary position in respect to the formation of dreams. I cannot allow that, as contributors to the content of dreams, they play any other part than is played, for instance, by the material of sensations which become currently active during sleep. ...read more.