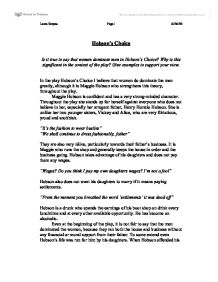 Is it true to say that women dominate men in Hobson's Choice? Why is this significant in the context of the play? Give examples to support your view.

Hobson's Choice Is it true to say that women dominate men in Hobson's Choice? Why is this significant in the context of the play? Give examples to support your view. In the play Hobson's Choice I believe that women do dominate the men greatly, although it is Maggie Hobson who strengthens this theory, throughout the play. Maggie Hobson is confident and has a very strong-minded character. Throughout the play she stands up for herself against everyone who does not believe in her, especially her arrogant father, Henry Horatio Hobson. She is unlike her two younger sisters, Vickey and Alice, who are very flirtatious, proud and snobbish. "It's the fashion to wear bustles" "We shall continue to dress fashionably, father" They are also very n�ive, particularly towards their father's business. It is Maggie who runs the shop and generally keeps the house in order and the business going. Hobson takes advantage of his daughters and does not pay them any wages. "Wages? Do you think I pay my own daughters wages? I'm not a fool" Hobson also does not want his daughters to marry if it means paying settlements. ...read more.

This is another example of Horatio Hobson's great snobbery along with the incident with Mrs Hepworth earlier. "... But if there is anything wrong I assure you I'm capable of making the man suffer for it. I'll -" After buying a low-class basement to both live and work in Will started up his own shoe business with Maggie. Vickey and Alice also married their desired husbands - with the help of their sister, and Hobson lost them all. A year later when Hobson is diagnosed as having chronic alcohol poisoning, Maggie returns home to look after him, although only after agreeing harsh conditions, and Hobson and Will go into partnership under Will's conditions. By now Hobson knows that he has lost and must give in to Maggie but more than ever before, her husband, William Mossop. "I think Hobson and Mossop is best" "His name on my sign-board!" "The best I'll do is this: Mossop and Hobson" "No" "... Very well. Mossop and Hobson" The title 'Hobson's Choice' is very ironic, because the phrase 'Hobson's Choice' means to have no choice, and this is exactly what Horatio Hobson had, if not throughout the play then certainly at the end of it. ...read more.

Out of the three Hobson sisters Maggie is the only one who really knows where she is going in her life. They each demonstrate a very well developed sense for the pecuniary advantage that could be gained from the marriage. It is not only Maggie Hobson who treats men as subjects and bosses them about but Vickey and Alice both do as well to some extent. It is a play with the plotting and planning of Maggie at its centre, as she successfully manipulates those around her - for their good, and for her own. In some contexts the play can be seen as comic. What is so ironic is the fact that while women have been running men for ages they are still banned from politics and professions. I think that Maggie is frustrated by her life, and sees in Willie the chance to escape from spinsterhood and drudgery in her father's shop and house. The Victorian attitude as to who was 'boss' in the house was the men-although in this play it would seem this position has been taken over somewhat by the women. Laura Scopes Page1 16/06/00 ...read more.