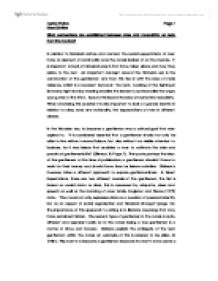 What connections are established between class and masculinity on texts from the module?

What connections are established between class and masculinity on texts from the module? In relation to historical culture and context, the social expectations of men have an element of continuality over the novels looked at on the module. It is important to look at historical events that have taken place and how they relate to the text. An important concept around the Victorian era is the construction of the gentleman and how this ties in with the idea of male violence, which is a recurrent feature in the texts. Looking at the fighting in Saturday night Sunday morning enables the reader to contextualise the angry young men of the fifty's. Around this issue is the idea of normative masculinity. When answering this question it is also important to look at gender identity in relation to class, race and nationality, the expectations of men in different classes. In the Victorian era, to become a gentleman was a cultural goal that men aspired to. "It is considered essential that a gentleman should not only be able to live without manual labour, but also without too visible attention to business, for it was leisure that enabled a man to cultivate the style and pursuits of gentlemanly life" (Glimour, R; Page 7). ...read more.

Easthope, E states " At present in the dominant myth of the masculine ego is imagined as closing itself off completely, maintaining a total defence. To be unified it must be masculine all the way through and so the feminine will always appear as something other or different and so a security risk". This portrays the image of the fortified masculine ego and relates to the common ideology at the time of Freudian psychology. This is the image of control and the boundaries that are to be defended at all costs. This can give reason for the violence that can be seen in the texts of the module, the best form of defence is attack; part of the male psychological structure is aggression, which is linked in art throughout the centuries to s****l acts. The violence can be seen to be an act of protecting the idea of masculinity. There are two opposing faces of masculinity in the novel; Segal, L, outlines these, "In short, there were at least two opposing faces of masculinity in the fifties. There was the new family man, content with house and garden. ...read more.

Masculinity within both novels can be seen as a social construction and therefore relevant to a particular time and culture. To be masculine does not remain static. Though there are obvious connections to working class men who appear more masculine in terms of normative masculinity, we must bear in mind the social surroundings and aspirations of males within any class. Not all middle class men see the characteristic of masculinity as important therefore they are less likely to be portrayed as such. Working class males are strongly linked to violence which is very masculine however is seen as a social norm within the working class communities. It is possible to conclude therefore that working class men are portrayed using normative masculinity whereas middle classes tend to be portrayed as gentlemen. Biography * Cheadle, B. (2001). The Cambridge Companion to Charles Dickens. Cambridge University Press. * Dickens, C. (1983). Great Expectations. Longman. * Eagleton and Pierce. (1979). Attitudes to Class in the English Novel. Thames and Hudson. * Easthope, A. (1992). What a Man's Gotta Do. Routledge. * Glimour. (1981). The Idea of The Gentleman in The Victorian Novel. George Allen and Unwin. * Segal, L. (1990). Slow Motion. Virago. * Sillitoe, A. (1975). Saturday Night Sunday Morning. Star. Allen, G. Carley Fulton Page 1 Masculinities ...read more.