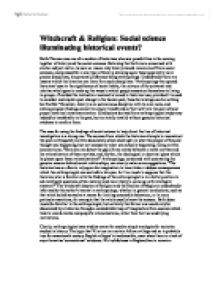 Witchcraft & Religion: Social science illuminating historical events? Keith Thomas was one of a number of historians who saw possibilities in the coming together of history and the social sciences. Believing that both were concerned with similar subject matter, he saw no reason why history should remain aloof from social sciences, and pressed for a new type of history, drawing upon these apparently more precise disciplines, his personal preference being anthropology. Undoubtedly there are lessons which the historian can learn from such disciplines: "Anthropology has opened historians' eyes to the significance of social habits, the mixture of the universal and relative which goes to make up the ways in which people accustom themselves to living in groups...Provided the instruction received is turned to historical use, provided it is used to consider and explain past change in the human past, these borrowings can be nothing but fruitful." However, history is an autonomous discipline with its own rules, and anthropological findings cannot be simply transferred as 'the truth' into the past without proper historical cross-examination. Conclusions derived from anthropological study may indeed be transferable to the past, but are totally invalid without genuine historical evidence to confirm them. The case for using the findings of social science to help direct the line of historical investigation is a strong one. ...read more.

of the evidence shall be singled out for remark..." While the citing of a large number of examples helps to reassure the reader that these examples are not exceptional, the failure to explicitly explain the various facets of a piece of evidence and the processes by which Thomas distilled it to a single sentence, arouses suspicions that the examples might have been distorted. Thomas provides little to refute G. R. Elton's charge that, "When the externally obtained scheme becomes doctrine, as too often it does, it stultifies the study of history by reducing history to a repository of examples selected or distorted to buttress the scheme." Whether or not the single sentences Thomas uses accurately reflect the essence of the sources (or even an element of them), it is extremely doubtful whether somebody's actions can be written off as being indicative of a single motivation as Thomas frequently does. "In anthropology, or anyway social anthropology, what the practitioners do is ethnography...What the ethnographer is faced with...is a multiplicity of complex conceptual structures, many of them superimposed upon or knotted into one another, which are at once strange, irregular, and inexplicit..." The credibility of Thomas' examples would have been enhanced had he taken the occasional case and exposed it to 'thick description', examining the whole variety of influences behind it, and, taking these into account, explaining why the interpretation he places upon it is valid. ...read more.

Some of its main conclusions owe much to anthropological conclusions, and these are not simply forced upon history without the cross-examination of historical evidence. In the last resort this is a work of history drawing upon anthropology, not of anthropological conclusions imposed upon the past as part of some general positivist scheme. It is, however, far from perfect. The examples used, while numerous, are given in a sentence or two, which cannot hope to relate the full implications of the source being employed, and might simply be distortions of the facts to back up the scheme Thomas attempts to describe. The whole survey seems slightly lopsided as a result of the consideration of mainly anthropologically-informed conclusions, and some of the conclusions which he does draw seem to have their share of weaknesses. All of this is harsh criticism, though, especially as very few books (and this would be one of them) claim to tell the whole story. Thomas does show that anthropology can open up a number of routes of enquiry which may well have been obscure to 'conventional' historians, and indeed to shed light on historical events. He may have gone a little too far in his borrowings, but he does not write bad history by any means. In the opinion of E. P. Thompson, Religion and the Decline of Magic is, "...an immensely important and stimulating book... ...read more.