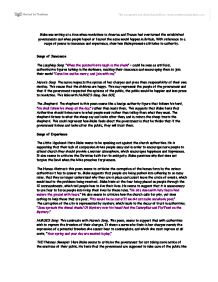 With reference to a range of poems in innocence and experience, show how Blake presents attitudes to authority.

Blake was writing at a time when revolutions in America and France had overturned the established governments and when people hoped or feared the same would happen in Britain. With reference to a range of poems in innocence and experience, show how Blake presents attitudes to authority. Songs of Innocence The Laughing Song: "When the painted birds laugh in the shade" - could be seen as artificial, authoritative figures lurking in the darkness, mocking their innocence and encouraging them to join their world "Come live and be merry, and join with me," Nurse's Song: The nurse respects the opinion of her charges and gives them responsibility of their own destiny. This means that the children are happy. This may represent the people of the government and that if the government respected the opinions of the public, the public would be happier and less prone to revolution. This links with NURSE'S Song. See SOE. The Shepherd: The shepherd in this poem seems like a benign authority figure that follows his herd, "He shall follow his sheep all the day," rather than leads them. This suggests that Blake feels that Authorities should listen more to what people want rather than telling them what they want. The shepherd listens to what the sheep say and looks after them, and in return the sheep trusts the shepherd. ...read more.

He was a non-conformist who thought that the Ten Commandments were restrictive. He also believed in leadership, but not a leadership as tyrannical and corrupt as the Monarchy or the Church. The Shepherd An example of Blake's ideal leadership is illustrated in "The Shepherd" in "Songs of Innocence". He explains how he thinks that if a leader does what he does properly he will be respected rather than feared. "He shall follow his sheep all the day," he doesn't lead he follows. The sheep are free to move wherever they like, but the shepherd will be behind them, keeping them safe and giving them support and help when it is needed, "for they know when their shepherd is nigh." Holy Thursday The complete opposite of this is shown in "Holy Thursday" from "Songs of Innocence". This poem is about a church service given for orphans and it illustrates what Blake hated about society and leadership. Unlike the sheep, the children have no freedom. They are in uniform, "In red and blue and green," and so there is little room for individuality. They also walk "Two by two" in organised rows. Blake even makes it sound military when he writes "Seated in companies they sit." ...read more.

When he is shut out, The door says, "Thou shalt not" it is negative, he thinks that churches talk about the things you can't do rather than the things you can. Also, the Ten Commandments are what Blake hated about Christianity, this insinuates a feeling negativity towards the church as well. In the last stanza, each line begins with, "And". This repetition is used to underline discomfort in the verse. "...priests in black gowns were walking their rounds," this sentence creates the image of a prison, the officers checking round the cells. The gowns they wear are "black", this again showing darkness and discomfort. Also in the last stanza, instead of following the ABCB rhyming scheme, Blake uses AB cc dd the last two lines are: "And priests in black gown were walking their rounds, / And binding with briars my joys and desires." This doesn't seem to make sense, it seems discordant. This whole poems is describing how restrictive Blake finds the church. Conclusion Although Blake was rejected by his contemporaries, after his death his work has become extremely popular and well known. It interprets life in a way not known before Blake's time, and has inspired many artists and writers. Although he may not have known it, Blake achieved a lot during his lifetime despite what many people said about him. His poems continue to have an effect on people, and the ideas and beliefs behind them still have meaning today. ...read more.