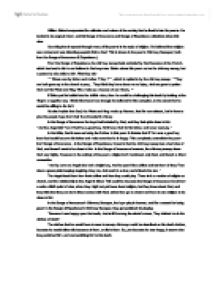 How William Blake incorporated his attitudes to society into his poems.

William Blake incorporated the attitudes and values of the society that he lived in into his poems. He tended to be angry in them, and his Songs of Innocence and Songs of Experience collections show this view. One thing that is spread through many of his poems is the topic of religion. He believed that religion was corrupt and was distorting people's link to God. This is shown in the poems Chimney Sweeper ( both from the Songs of Innocence & Experience ) . From the Songs of Experience, the chimney sweep feels excluded by God because of the Church, which has lead to him to not believe in God anymore. Blake voices this poem not as the chimney sweep, but a passer by who talks to him. ...read more.

He also implies that God, the Priest and King made up Heaven, that it's non-existent, but is there to give the people hope from their live shrouded in misery. In the Songs of Innocence the boys feel included by God, and they feel quite close to him. ' And the Angel told Tom, if he'd be a good boy, He'd have God for his father, and never want joy. ' In the bible, God is seen as being the Father. In this poem it dictates that if Tom was a good boy then God would become his father and make sure that he is happy. This completely contradicts the poem from Songs of Innocence - in the Songs of Experience, it seems that the chimney sweep has a bad view of God, and doesn't want to be close to him. ...read more.

they think that they can be in direct contact with God, rather than go to church and have to use religion to be close to him. In the Songs of Innocence's Chimney Sweeper, the boys play in heaven, and it's a reward for being good. In the Songs of Experience's Chimney Sweeper, they get punished for playing. ' Because I was happy upon the heath, And smil'd among the winter's snow, They clothed me in the clothes of death ' The clothes that he would have to wear to sweep chimneys could be described as his death clothes, because he would either die because of them, or die in them. So, just because he was happy, it seems that they punished him, and are banishing him to his death. ...read more.