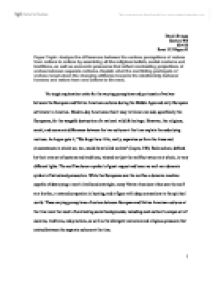 Cultural Perceptions of the Wolf

Daniel Strauss Section 306 10/4/10 Envir 113 Paper #1 Paper Topic: Analyze the differences between the various perceptions of wolves from culture to culture by examining all the religious beliefs, social customs and traditions, as well as economic pressures that reflect contrasting projections of wolves between separate cultures. Explain what the conflicting portrayals of wolves reveal about the changing attitudes towards the relationship between humans and nature from one culture to the next. No single explanation exists for the varying perceptions and portrayals of wolves between the European and Native American cultures during the Middle Ages and early European settlement in America. Modern-day Americans find it easy to blame one side, specifically the Europeans, for the vengeful destruction of a national wildlife heritage. However, the religious, social, and economic differences between the two cultures at the time explain the underlying motives. As Lopez puts it, "We forget how little, really, separates us from the times and circumstances in which we, too, would have killed wolves" (Lopez, 138). Each culture, defined by their own set of customs and traditions, viewed not just the wolf but nature as a whole, in very different lights. ...read more.

The reason for this was that most Native American and Eskimo tribes in North America have always been hunting societies. To make a living for a Native American was to survive, and they have not strayed from this tradition. On the contrary, when the Europeans settled in America, they brought their lurid misconceptions regarding nature with them. In eyes of the European settler during the start of the Manifest Destiny, nature presented a barrier to economic progress. The economic circumstances surrounding the desire for expansion during the Manifest Destiny were quite different from the Native American's economic situation, which they paid much less attention to than the Europeans. The European settlers' desire to conquer and civilize the New World catalyzed the transition from hunting and gathering to agriculture. With this transition came a shift in economic interests that consequently altered the perceptions of wolves from an economic standpoint. Some people may argue that the shift to an agrarian society resulted in positive perceptions of wolves because they often defended farmers' crops by killing the deer that feasted on them. However, the farmers in Europe and early America quickly shifted their focus towards raising livestock rather than crops. ...read more.

All things considered, the varying perceptions of wolves between Native American and European cultures resulted from the divergent social, economic, and religious pressures at the time. In summary, Native Americans possessed unique customs and traditions that varied greatly from those in Europe at the time. In addition, economic circumstances have defined how people looked at nature throughout the course of human history. During times of disease and famine in Europe, the unfavorable economic circumstances resulted in the negative feelings towards wolves. Consequently, these differences greatly contributed towards the negative perceptions of wolves in European culture as well as the positive perceptions of wolves in Native American culture. Finally, religious factors have the ability to shape an entire system of beliefs within a single culture. The Catholic Church's reign of terror during the Inquisition brought about severely contrasting perceptions regarding wolves in comparison to many Native American beliefs. As a final point, all aspects of a culture, including social, economic, and religious factors, contribute to the changing perceptions of wolves and nature from one culture to the next while helping to explain the underlying motives of these perceptions in the process. Negative and false perceptions of nature don't necessarily need to be justified, but their explanations are necessary so that future generations may learn from them. 1 ...read more.