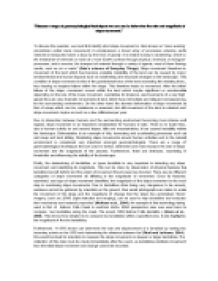 Discuss a range of geomorphological techniques we can use to determine the rate and magnitude of slope movement.

"Discuss a range of geomorphological techniques we can use to determine the rate and magnitude of slope movement." To discuss the question, we must first identify what slope movement is. Also known as "mass wasting (sometimes called mass movement) it encompasses a broad array of processes whereby earth material is transported down a slope by the force of gravity. It is related closely to weathering, which is the breakdown of minerals or rocks at or near Earth's surface through physical, chemical, or biological processes, and to erosion, the transport of material through a variety of agents, most of them flowing media, such as air or water" (Gale's science of Everyday Things). Slope movement therefore is movement of the land which has become unstable. Instability of the land can be caused by many environmental and human impacts such as weathering and structural changes to the landscape. The condition of slope movement is that of the gravitational force of the land exceeding the resisting force, thus leading to incipient failure within the slope. This therefore leads to movement. After the initial failure of the slope, movement occurs within the land which maybe significant or unnoticeable depending on the rate of the mass movement. Landslides for instance, are movements of a very high speed thus are very dramatic movements of land, which have immediate and delayed consequences, for the surrounding environment. ...read more.

Furthermore, "A GPS device can determine the size and displacement of a landslide by setting the boundary points on the GPS and determining the distance between the" (Reid and LaHusen, 2004), this would be ideal for scientists to measure the slope movement on steeper or larger landslides. The collection of this data must be made immediately after the event, as landslides reinitiate movement thus the initial slope movement and change cannot be recorded. Moreover, the physical measuring of landslides is very important, due to the accurate mapping of topographic maps, which allow the evaluation of slope movement. It also allows the collection of data that shows the volume of change within the environment and compares this to older topographic maps, of the same specified area; thus commenting on the deformation of the landscapes. Furthermore, the surveying of topographic features also comments on how the landscape has altered and the extent of deformation the land has experienced. Once this information has been gathered, structural mapping of an area can be created. This is the process of locations being highlighted, due to faults and folds created the landscape and characteristics of that specified area. Furthermore, Gerald F. Wieczorek states that "reo photography is very important so that the topography can be viewed in three dimensions, making the mapping of landslide more accurate. Colour photography is bene?cial for mapping; false-colour infrared photography can emphasise the contrast between landslides and non-landslide topography", thus allowing a simple judgement to be made of ...read more.