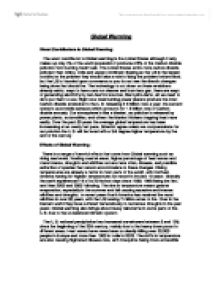 Global Warming Worst Contributors to Global Warming: The worst contributor to Global warming is the United States although it only makes up only 4% of the world population it produces 25% of the Carbon dioxide pollution from burning fossil fuels. The United States emits more carbon dioxide pollutent then China, India and Japan combined. Seeing as the US is the largest contributor the problem they should take a role in fixing the problem before hand, but the US is founded upon commerce so you do not see the dirastic changes being done that should be. The technology to cut down on these emsisions already exists, ways to have cars run cleaner and burn less gas, there are ways of generating electricity by non-harmful sources, like hydro-dams, all we need to do is put them to use. Right now Coal burning power planets produce the most Carbon dioxide emsission in the U.S. releasing 2.5 billion tons a year, the second worse is automoblie exhause which accounts for 1.5 billion tons of Carbon dioxide annualy. ...read more.

Over in the Eastern world they have suffered tremendously to numerous droughts in the past years. Global warming also brings about heavy rainstorms in some parts of the U.S. due to the un-balanced climatic system. The U.S. national percipitation has increased somehwere between 5 and 10% since the beginning of the 20th century, mainly due to the heavy down pours in different areas. Heat waves have never been so deadly killing over 20,000 people in Europe and more than 1500 in India in 2003. The shifts in temperature are also causing hightened disease rate, with mosquitos being more accessible to different locations, where they weren't able to inhabit before. Recently the Malaria disease transmitted by mosquito have been found in higher elevations of Indonesia, before mosquito's were limited to elevations of 3,300 feet but now are being recorded up to 7,000 feet. Another effect of Global Warming is melting glaciers and early ice thaw, with river and lakes undoubtly thawing more quickly than ever before. It is figured that by 1970 all of the glaciers in Glacier National Park will have been melted away. ...read more.

Furnace maintenance will help to reduce the amount of heat you need, reducing fossil fuel production. Home maintenance: Weather-stripping, insulation and proper ventilation will help a lot to reduce the amount of heat your home needs. Using cold water instead of hot will reduce the amount of energy needed, as well only running dishwashers and washing machines when full. Composting helps dispose of biodegradable waste in your home and planting trees on your property will help to control carbon dioxides in the air, and helps to dispose of toxins in the soil. Therefore preventing them from being released into the atmosphere. Summary: The temperature of the atmosphere near the earth's surface is warmed through a natural process called the greenhouse effect. Visible, short-wave light comes from the sun to the earth, passing unimpeded through a blanket of thermal, or greenhouse, gases composed largely of water vapor, carbon dioxide, methane, nitrous oxide, and ozone. Infrared radiation reflects off the planet's surface toward space but does not easily pass through the thermal blanket. Some of it is trapped and reflected downward, keeping the planet at an average temperature suitable to life, about 60�F (16�C). ...read more.