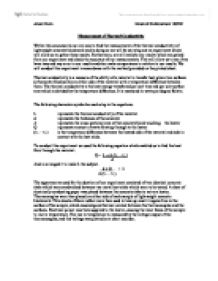 Within this coursework our aim was to find the measurement of the thermal conductivity of lightweight concrete blockwork and in doing so we will be carrying out an experiment which will allow us to gather these results. Furthermore, we will analyze our results which we gained from our experiment and check the accuracy of our measurements. This will allow us to see if we have incurred any error in our results and also make comparisons in relation to our results. We will conduct this experiment in accordance with the method provided on the printed sheet.

Thermal conductivity is a measure of the ability of a material to transfer heat given two surfaces (of concrete blockwork) on either side of the material with a temperature difference between them. The thermal conductivity is the heat energy transferred per unit time and per unit surface area which is divided by the temperature difference. It is measured in watts per degree Kelvin.

The following characters symbolize each step in the equations:

(t₁ - t₂)        is the temperature difference between the heated side of the material and side in contact with the heat sinks.

To conduct this experiment we used the following equation which enabled us to find the heat flow through the material:

And re-arranged it to make λ the subject.

The apparatus we used for the duration of our experiment consisted of two identical concrete slabs which were sandwiched between two metal heat sinks which were to be tested. A sheet of electrically conducting paper was placed between the concrete slabs to act as a heater. Thermocouples were then placed on either side of each sample of lightweight concrete blockwork. Thin sheets of foam rubber were then used to take up small irregularities in the surface of the sample, which ensured good thermal contact between the thermocouples and the surfaces. Electrical power was then supplied to the heater, causing the inner faces of the sample to rise in temperature. The rise in temperature is measured by the voltage output of the thermocouples, and this voltage was plotted on a chart recorder.

Below is an explanation of the experimental procedure that was followed:

Having re-arranged the equation earlier, we can now work out the thermal conductivity of lightweight concrete blockwork.

To find the thickness of the concrete blockwork (d), both samples were identical, therefore we measured one sample. We used a 30cm rule and got the result of 4cm. This measurement was then converted to meters due to the fact we was working out the thermal conductivity in “m” and got the answer 0.040m:

Firstly we measured the thickness of the lightweight concrete slab using a ruler which was 0.04m. Next, we needed to calculate the surface area which was the length multiplied by the width of one of the concrete slabs:

To find the surface area of the concrete blockwork (A), we simply measured the length and width, and multiplied the two measurements together:

This is the same surface area for both the samples as they were identical.

To work out the watts we used the formula (q) watts = (v) volts x (i) current. The answer will be divided by two because there are two lightweight concrete slabs.

To find out temperature difference (t₁ - t₂), we used the graph below which took the temperature in a point of time of both pieces of concrete blockwork. 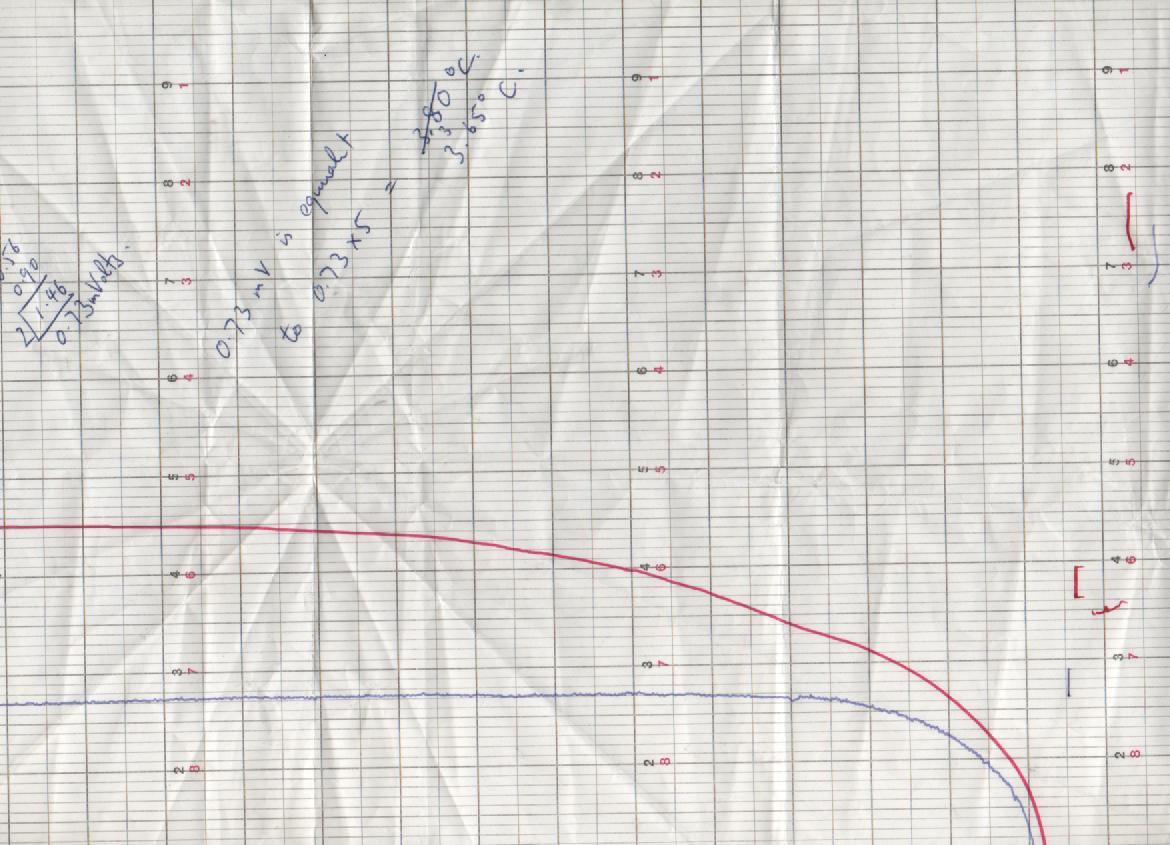 We then needed to find the average temperature difference by finding the sum and dividing the answer by 2.

The calculated temperature difference is 3.65°C.

So gathering all the results together, we can put them into the equation and find out the thermal conductivity.

I have now found the thermal conductivity.

We weighed the concrete blockwork and it weighed 4.030kg. We then calculated the volume by multiplying the length, width and height and got 0.002964 m³. So:-

We also knew that the density of water is 1000kg m³. Now knowing the figures we needed to calculate the moisture content, we applied them to the equation.

Putting it into the equation we can work out the thermal conductivity at 3% using the table below:

The graph below shows thermal conductivity against moisture content: 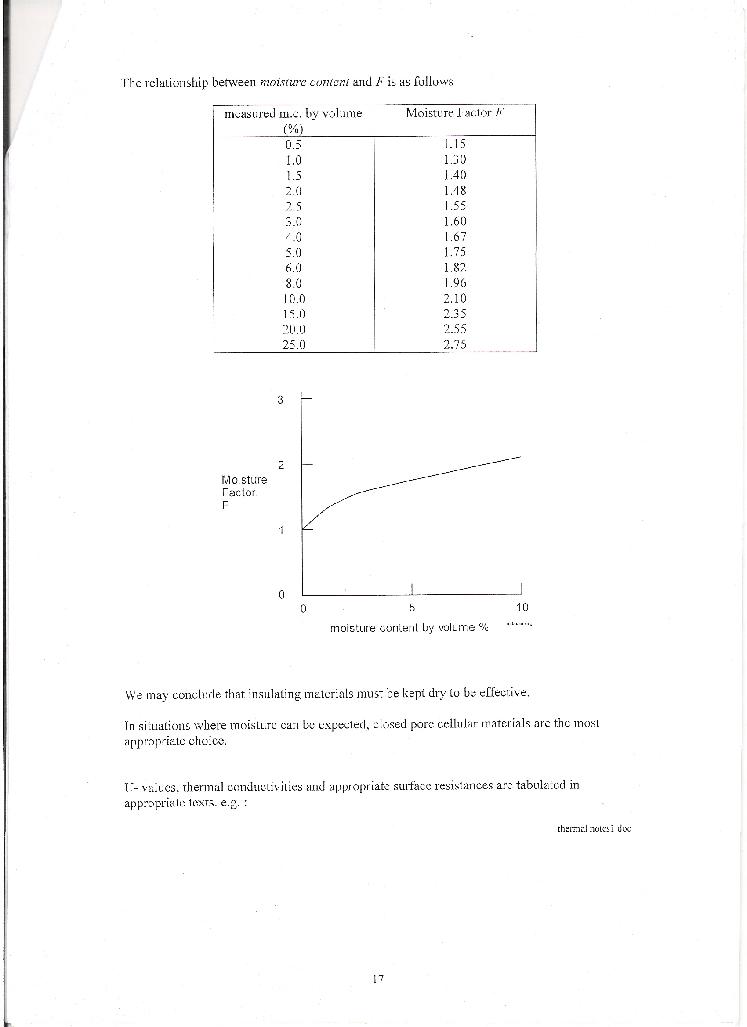 Coating manufacturers have discovered effective methods of overcoming adhesion problems on damp concrete surfaces with the use of various penetrating primers. Most manufacturers will agree, however, that a dry surface will certainly improve adhesion. There is no question that excessive moisture in the concrete can create serious problems when it begins to migrate out of the concrete after the coating is applied. Coating application instructions often specify that the surface must be dry; sometimes they specify an allowable moisture content, expressed in a percentage.

What they fail to mention is how deep this dryness must be or if there is a maximum vapour transmission rate allowable. There is an increasing awareness in the industry of these parameters. The flooring industry has shown a great deal of concern over vapor transmission, generally agreeing that 3 lbs./1000 sq. ft./24 hours (1.4kg/90 sq. m/24 hours) Is an acceptable rate.

The graph below indicates the thermal conductivity (W/mK) against density (kg/m³) for lightweight concrete blockwork: 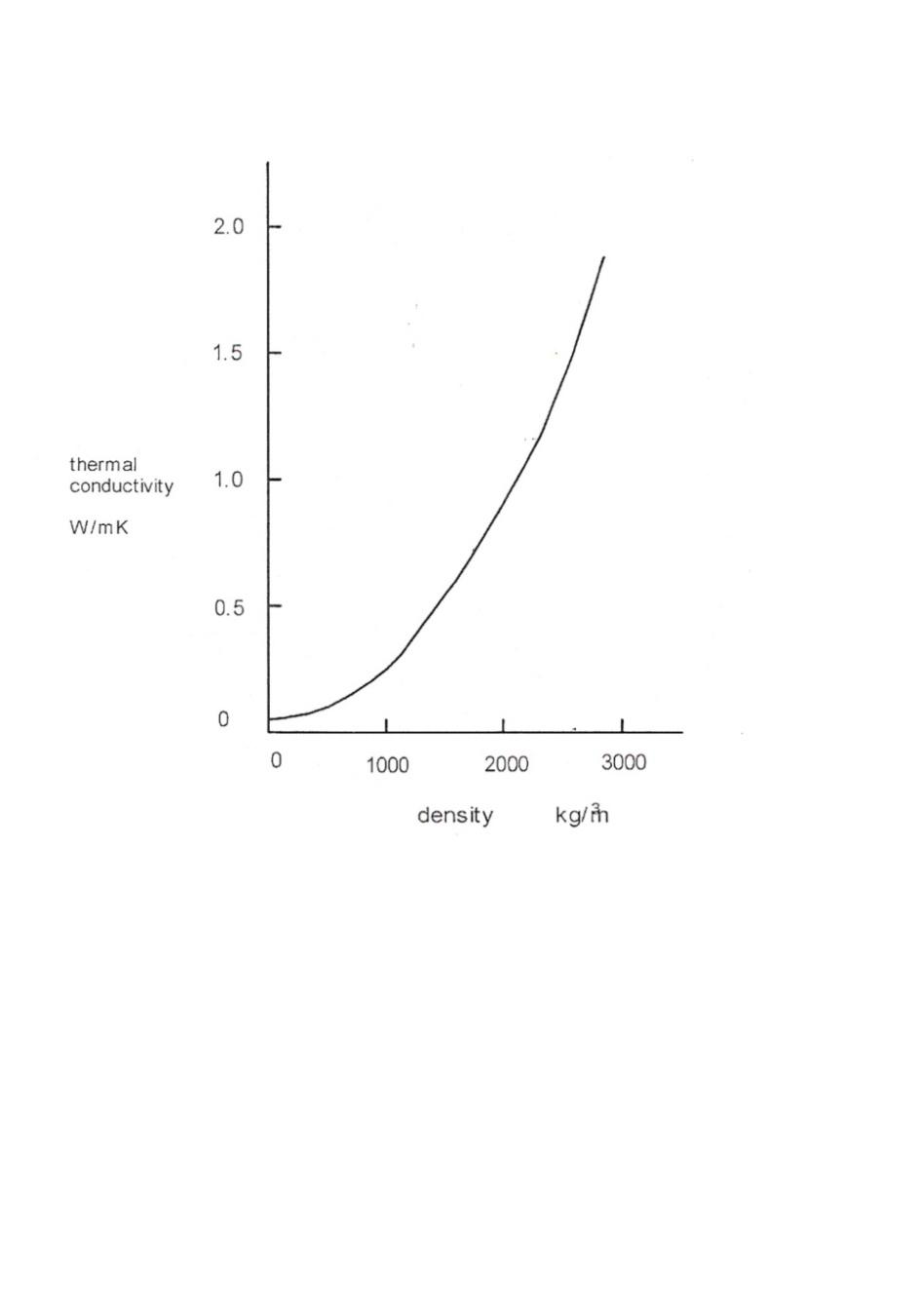 Within this experiment, a few errors would be likely, which could alter our results. Some of these variables could be uncontrollable and some could just be lack of accuracy.

Another reason for the inaccuracy of results could have been human error in taking readings off the graph. The inaccuracy of these could cause the end result to be incorrect. This is not a big problem; however, increasing the accuracy would have given better results.

I think that the experiment was reasonably accurate and satisfactory results were achieved. If you look at the graph below, you can see the measurements for concrete are slightly off the mark, which could be due to the errors identified above. The two points recorded were in line with each other on the graph showing thermal conductivity against density, so I think the experiment was acceptable.

Other than this we could have used some other form of technique to find the temperature, but I think a thermometer would be less accurate than the temperature reader and it would break when slotted between two concrete blocks. In place of the ammeter I don’t think there is a more accurate way of measuring the current. In conclusion, I think that we worked out the thermal conductivity and on the graph it relates to my results, so this experiment was successful.