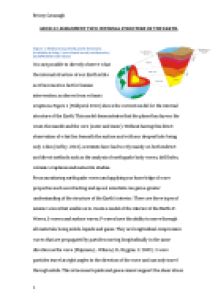 Internal Stucture of the Earth

﻿Briony Cavanagh GEOS112 ASSIGNMENT TWO: INTERNAL STRUCTURE OF THE EARTH. Figure 1: Hildyard. R, (2010), Earth Structure. Available at: http://www.leeds.ac.uk/ruskinrocks/Earth%20Structure.html It is not possible to directly observe what the internal structure of our Earth is like as it becomes too hot for human intervention, as shown from volcanic eruptions. Figure 1 (Hildyard, 2010) shows the current model for the internal structure of the Earth. This model demonstrates that the planet has layers: the crust, the mantle and the core (outer and inner). Without having this direct observation of what lies beneath the surface and with our deepest hole being only 12km (Coffey, 2010), scientists have had to rely mainly on both indirect and direct methods such as the analysis of earthquake body waves, drill holes, volcanic eruptions and meteorite studies. From monitoring earthquake waves and applying our knowledge of wave properties such as refracting and speed, scientists can gain a greater understanding of the structure of the Earth?s interior. There are three types of seismic waves that enable us to create a model of the interior of the Earth: P-Waves, S-waves and surface waves. P waves have the ability to move through all materials, being solids, liquids and gases. ...read more.

This drill hole has reached a depth just over 12km into the Earth’s crust (Coffey 2010). This hole has enabled scientists to gather rock samples from the crust and are hence able to discover what composes the crust of the Earth. The oceanic crust is mainly composed of basalts whilst the continental crust is mainly composed of granite. The mantle is the thickest layer inside the Earth. It accounts for about two-thirds of the Earth’s mass and is made up of a thick layer of solid, hot rock. We know the mantle exists due to MohoroviÄiÄ discontinuity (moho). This discontinuity locates the edge between the mantle and the crust. The moho showed a large difference in the velocity of P and S waves between the crust and the mantle, showing that there is a rapid change in material (Chaklader, A.C.D). The other discontinuity is known as the transition zone. The transition zone marks the difference between the upper and lower mantle as a result of sudden seismic-velocity changes between 410km and 660km (Gupta, H.K. 2011). This is a result of a change in chemical composition of the olivine. We know that the mantle is solid as both P and S waves are able to travel through. ...read more.

Scientists know this due to the passing of s-waves through this centre and also through figuring out the mass of the Earth by using gravity. We are able to work out the mass of Earth by knowing the velocity at which objects fall to Earth. Because scientists know the density of the crust and the mantle they are able to determine the weight of each segment. And compared this with the total weight of the Earth. After at first reaching a number that was too small, they concluded that there must be something heavier and denser in the middle of the mantle. The continuing pressure of the Earth when it first formed caused its original material to heat. It became so hot that these materials began to melt and this is what caused the layering of the Earth. The heavier materials condensed into the middle of the Earth and the lighter materials floated up to the surface of the planet. From all this we can see that the current model for the internal structure of the Earth was created using all different types of scientific discoveries including both indirect and direct methods. It is important that we see the difference between fact and theory in order to produce an accurate representation of our world today. ...read more.