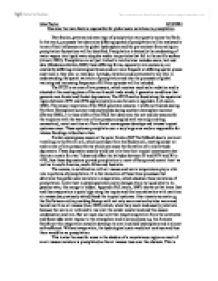 The influence of differing spread of precipitation

Distribution, patterns and even type of precipitation vary greatly across the Earth. In this work, processes that determine differing spread of precipitation will be analysed in terms of their influences on the global hydrosphere and the pre-eminent force acting on precipitation fluctuations will be identified. Precipitation is basically the condensing of water vapour into liquid water droplets and/or ice particles that fall to the earth's surface (Arnell, 2002). Precipitation is not just limited to rain but also includes snow, hail and dew (Henderson-Sellers,1986) these differing forms, especially rain and snow, are created by differing climatological forces and are more frequent at differing spatial places and times in they year or even day. Latitude, elevation and continentality are vital in understanding the spatial variation of precipitation and also the processes of global warming and increasing frequency of El Nino episodes will be included. The ITCZ is an area of low pressure, which receives much solar radiation and is situated at the meeting place of the north-south trade winds; it generates conditions that generate non-frontal and frontal depressions. The ITCZ can be found along the equatorial region between 20�N and 20�S approximately as can be seen in appendix A (Linacre, 1997). The annual migrations of the ITCZ generates seasons: it shifts northwards during Northern Hemisphere summer and southwards during southern hemisphere summer (Harvey 2000), it is these shifts of the ITCZ that determine the wet ...read more.

or hailstorms (Buchdahl, 2000). So elevation also takes a key role in denoting where precipitation can occur on land. Anti-cyclones yield little in the way of precipitation (apart from the occasional thunderstorm) but it is worth mentioning them in the way that they divert depressions. Anti-cyclones are, unlike depressions, an area of descending high pressure and may last for many weeks. There are bands of air which generally have permanent areas of high pressure and these are on the latitudes of 30�N and 30�S, the area of the descending limb of Hadley. Anti-cyclones act as "blocking Highs" (Buchdahl, 2000); areas of high pressure which divert depression around them and thus change their distribution. Potentially the most pre-eminent factor affecting precipitation variation is Global warming, which is the warming of the atmosphere due to the increasing amount of greenhouse gases in the atmosphere e.g. carbon dioxide, methane (Loaiciga, 1996) and water vapour (Arnell 2002), these gases aid in reflecting heat back down to earth and thus warming the planet. This is called the greenhouse effect (Arnell 2002) for naturally induced warming and enhanced greenhouse effect (Linacre 1997) for human induced warming. With an increase in temperature more evapotranspiration from land and evaporation from seas, would provide more water vapour, which also adds to the effect (Kovach, 2003), to the hydrosphere and thus increase potential precipitation rates, by as much as 10% (Loaiciga, 1996). ...read more.