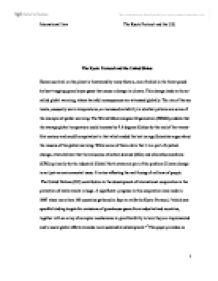 The Kyoto Protocol and the United States

The Kyoto Protocol and the United States Human survival on the planet is threatened by many factors, one of which is the threat posed by heat-trapping green house gases that cause a change in climate. This change leads to the so-called global warming, whose harmful consequences are witnessed globally. The rise of the see levels, unusually warm temperatures, an increased variability in whether patterns are some of the example of global warming. The World Meteorological Organization (WMO) predicts that the average global temperature could increase by 3.6 degrees Celsius by the end of the twenty-first century and could be equivalent to that which ended the last ice age. Scientists argue about the reasons of the global warming. While some of them claim that it is a part of cyclical change, others believe that the emissions of carbon dioxide (CO2) and chlorofluorocarbons (CFCs) primarily by the industrial Global North states are part of the problem Climate change is not just an environmental issue: It is also affecting the well-being of millions of people. The United Nations (UN) contribution to the development of international cooperation in the protection of enviornment is huge. A significant progress in this cooperation was made in 1997 when more than 160 countries gathered in Japn to ratify the Kyoto Protocol, "which sets specific binding targets for emissions of greenhouse gases from industrialized countries, together with an array of complex mechanisms to give flexibility in how they are implemented and to assist global efforts towards more sustainable development."1 This paper provides an overview of the Kyoto Protocol and the position of the Unites States on issue of global warming. ...read more.

14 Although the EU was in favor of cooperation in meeting the targets; the US eventually ended up getting its wish. According to the Annex 1 of the Protocol countries will be allowed to "implement and/or further elaborate policies and measures in accordance with its national circumstances."15 However, with the EU pressure, provisions were installed which gave the Conference of the Parties the power to "consider ways and means to elaborate the coordination of such policies and measures."16 Admitting that relying on domestic measures alone to meet the targets could be troublesome, the Kyoto Protocol offers considerable flexibility associated with multiple gases and sinks through three mechanisms: Emissions Trading, Joint Initiative, and the Clean Development Mechanism (CDM). Emissions Trading Emission Trading is the first mechanism in the Protocol which aims to provide flexibility and choice in terms of meeting individual quotas as to the amount of reductions. The concept behind Emission Trading "enables any two Parties to the Protocol to exchange part of their emission commitment, in effect redistributing the division of allowed emissions between them, at any time."17. Initially this trading activity has been limited to Annex 1 parties, as they are the only parties with legally binding commitments. Joint Initiative Project-based 'joint implementation' refers to the possibility of emission reductions in one country being funded from, or arranged jointly with another country or company from that country. "The sponsor company and/or country can claim the emission reduction as a 'credit' against its own required reductions in emission."18 This cross-border investments are applied only to Annex 1 Parties as stated in Article 6 of the Protocol. ...read more.

Many states have also introduced State Greenhouse Gas Registries, which register their voluntary greenhouse gas emission reductions.28 Conclusion After Russia ratified the Protocol at the United Nation's Framework Convention on Climate Change's Tenth Conference of the Parties in Buenos Aires, it will come into effect on February 16, 2005. Harlan Watson, US negotiator, said, "The Kyoto protocol was a political agreement. It was not based on science."29 He also added, "agreeing to Kyoto does not necessarily mean that you are going to meet those commitments." 30 Although international community is trying "to bring the United States back to the fold"31 claiming that the US participation is necessary for the protection of the environment and well-being of millions of people, let us consider the other side of the issue. How fair is it to the US to contribute more than developing countries such as China and India, while their economy is growing at a rapid pace? How reasonable is it for the United Sates, at this point, being one of most industrialized countries in the world, to reduce its emissions paralyzing its economy? And finally, who can guarantee that the global warming is mainly caused by the emission of CO2, and that the cut of carbon dioxide will improve the situation? I support the US position of investing money on research and on cleaner technologies. It is undeniable that all these incentives require time and money. But we must also understand that industrial revolution, which is largely blamed for the CO2 emissions, did not occur in a 10 years period. Consequently, it will take to take time to come up with new solutions for this major issue that the world is facing. ...read more.