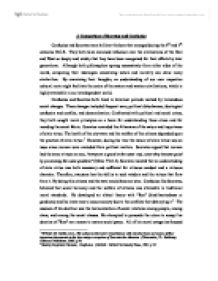 A Comparison of Socrates and Confucius.

A Comparison of Socrates and Confucius Confucius and Socrates were brilliant thinkers that emerged during the 6th and 5th centuries B.C.E. They both have exercised influence over the civilizations of the East and West so deeply and widely that they have been recognized for their efforts by later generations. Although both philosophers sprang successively from either sides of the world, comparing their ideologies concerning nature and morality can draw many similarities. By examining their thoughts, an understanding of our own respective cultural roots might facilitate the union of the eastern and western civilizations, which is highly attainable in our interdependent world. Confucius and Socrates both lived in historical periods marked by tremendous social changes. These changes included frequent wars, political disturbances, ideological confusion and conflict, and demoralization. Confronted with political and social crises, they both sought moral principles as a basis for understanding those crises and for mending the social fabric. Socrates reminded the Athenians of the nature and importance of civic virtue. The health of the city-state and the welfare of the citizens depended upon the practice of civic virtue.1 However, during his time the nature of civic virtue was an issue since women were excluded from political matters. Socrates argued that women had the same virtues as men, "everyone is good in the same way, since they become good by possessing the same qualities" (Meno 73c1-2). ...read more.

This is the most important activity in life. In Plato's Protagoras, Socrates is represented as holding that virtue is knowledge which cannot be taught, or learned by memorizing what a teacher has said, but must be acquired in a way that shapes the soul.5 In regard to human nature, Confucius once said, "by nature, near together; by practice, far apart" (Analects XVII, 2). He thought that at birth people's nature was almost the identical and that the great differences in morality were caused by practice. He believed that basic human needs transcend material goods and that the common nature of human beings consisted in pursuit of goodness and virtue. "Goodness is more to the people than water and fire" (Analects XV, 334). This means that the pursuit of morality is more important than that of the physical necessities of life. Confucius dedicated his whole life to the search for "the human-way" (i.e. the norms of social life) and he tried to implement this way during the time he lived. He believed that the aim of human life should be to actualize these norms by "learning the way," and "observing the way".6 The essence of "the human-way" was Ren, with kindness and affection as its core, the norms of which were inherent in human relations.7 Evidently, the moral life to Confucius was the center of the social life. ...read more.