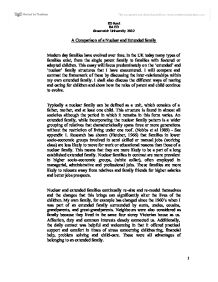 A Comparison of a Nuclear and Extended family

A Comparison of a Nuclear and Extended family Modern day families have evolved over time. In the UK today many types of families exist, from the single parent family to families with fostered or adopted children. This essay will focus predominately on the 'extended' and 'nuclear' family structures that I have encountered. I will compare and contrast the framework of these by discussing the inter-relationships within my own extended family. I shall also discuss the different ways of rearing and caring for children and show how the roles of parent and child continue to evolve. Typically a nuclear family can be defined as a unit, which consists of a father, mother, and at least one child. This structure is found in almost all societies although the period in which it remains in this form varies. An extended family, while incorporating the nuclear family pattern is a wider grouping of relatives that characteristically spans three or more generations without the restriction of living under one roof. (Nobbs et al 1989) - See appendix 1. Research has shown (Fletcher, 1966) that families in lower socio-economic groups involved in semi skilled or manual jobs (working class) are less likely to move for work or educational reasons than those of a nuclear family. ...read more.

has shown that, particularly among the extended working-class families, there is considerable relationship of dependence and mutual aid between the wife of a family and her own mother. It goes on to point out that that the re-housing of young working-class families in 'New Towns', thus creating a nuclear unit, at a distance from 'Mum' suddenly presented young wives with a disquieting independence, finding themselves forced to act on their own initiative. This caused emotional upset, as this was a responsibility unaccustomed to them. It is important, therefore, in some areas that the extended family stays intact. The fathers in a 'mother- centred' family often have little real authority with which to play out their expected role as head of the household and form strong relationships instead with work colleagues. Sons often follow their father's footsteps into the same profession, often working side by side with them, forming the same strong bonds between father and son, as the daughters accomplish with their mothers. Children tend to have more playmates that are cousins, and the older ones are frequently called upon to care for siblings within the extended family. Close relationships within an extended group have their value, but they can also be limiting, confining, frustrating, so that the loosening of ties for some people at any rate, may constitute a desirable improvement in lifestyle. ...read more.

This leads to a child that copes with stress well and has a co-operative and self-reliant outlook on life. Minimal evidence can be found to determine which of these styles of parenting are dominant in any particular family structure, but inevitably it would be fashioned by how the parents were themselves raised. From experience of working in a secondary school that accommodates a high percentage of children from working class, and probably extended families, it is noticeable that their children show many of the visual signs associated with the authoritarian style. Often their behaviour is aggressive and they appear unhappy and stressed with life. Importantly, from a teaching perspective it is essential to be aware of the specific family structure when dealing with a child. To be able to work effectively with children and families alike it must be remembered, whatever the family type, the family forms a central part of any child's life. We should be deterred from stereotyping families in order to best assist children in their education. In summary this essay has compared and contrasted nuclear and extended families and identified the roles and relationships that are prevalent among the more conventional of these family structures. Personal reflections have been included, where relevant, to add realism. It has explained how family life has evolved in recent times and given an insight into the parenting styles adopted and the effect they have had on the child. ...read more.