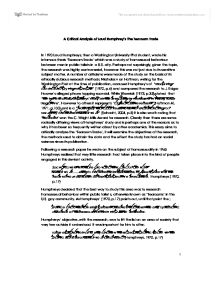 A Critical Analysis of Laud Humphreys The Tearoom Trade

A Critical Analysis of Laud Humphrey's The Tearoom Trade In 1970 Laud Humphreys, then a Washington University Phd student, wrote his infamous thesis 'Tearoom Trade' which was a study of h********l behaviour between men in public toilets in a U.S. city. Perhaps not surprisingly, given the topic, the research was highly controversial, however this was not just due to its sensitive subject matter. A number of criticisms were made of the study on the basis of its ethically dubious research methods. Nicholas von Hoffman, writing for the Washington Post at the time of publication, accused Humphrey's of 'snooping around and spying on people' (1970, p.6) and compared the research to J. Edgar Hoover's alleged phone tapping scandal. While Warwick (1973, p.35) stated that 'the net effect of Humphreys' study on the research environment is likely to be negative'. However to others it represents 'a great achievement' (Hoffman M, 1971, p.100) and is a 'rich study that adds much to better understanding of sexuality and human behaviour.' (Schacht, 2004, p.5) It is also worth noting that 'Tearoom' won the C. Wright Mills Award for research. Clearly then there are some radically differing views of Humphreys' study and is perhaps one of the reasons as to why it has been so frequently written about by other academics. This essay aims to critically analyse the 'Tearoom Trade', it will examine the objectives of the research, the methods used to obtain the data and the effect the study has had on social science since its publication. ...read more.

Also, due to the reliance upon the researcher's own observational skills, it can be argued that the method is 'too impressionistic and subjective' (Burnham et al, 2008, p.279) leading to accusations of bias or 'going native'. As with the majority of qualitative research, there is also the problem of whether a relatively small sample is representative of a population or ethnic group. However as Burnham et al (2008,p.280) again point out, 'perhaps the major issues to confront the researcher are the ethical ones' particularly in regards to covert observation and the dishonesty and invasion of privacy generally required . Nevertheless there are many scholars who believe that participant observation has a great deal to offer the social scientist. Indeed May (1999, p.154) argues that participant observation; is one of the most rewarding methods which yields fascinating insights into people's social lives and relationships......and assists in bridging the gap between people's understanding of alternative lifestyles and the prejudices which difference and diversity so often meet. The ethical issues raised by Humphreys' research methods are, unsurprisingly, the main causes of controversy within his study. The central criticisms levelled at the work have been in regard to the deception involved and the invasion of privacy. As Warwick (1973, p.31) argues; The concatenation of misrepresentations and disguises in this effort must surely hold the world record for field research and ...... he intruded much too far into the lives of the men he observed and studied. However Humphrey's offers two explanations, in justification of his methods. ...read more.

(Desroches, 1990, p.35) This essay has examined and analysed the research design and methods that Humphreys undertook with his study. It has addressed the objectives of the research and its success in achieving them. It is clear that there are many criticisms that can and have been made of the 'Tearoom Trade' in terms of its dubious ethical nature. In keeping with the main problems associated with covert participation observation, there are major concerns in regards to sample size and the demographic representativeness of the subjects. There are also the obvious criticisms in terms of deception and invasion of privacy. As Erikson (1967, p.373) argues, it is wrong for a; sociologist to deliberately misrepresent his identity and ........ to misrepresent the character of the research in which he is engaged. However it is important to note the fact that with 'participant observation it is simply impossible to do the research without some degree of deception.' (Babbie, 2004, p.15) Humphreys' study was a brave and ground-breaking work, it made a significant contribution to social science by pushing the boundaries of research on an otherwise misconstrued social group. An appropriate summing up is made by Babbie (2004, p.18), who reflects that; Laud Humphreys' willingness to work in the shadows of right and wrong, all the while committed to being ethical in those endeavours, forces students to think about ethics rather than swearing allegiance to an established code. It is for this reason that Humphreys' work is so important, through pushing against the perceived boundaries of conformist social research, he has inspired others to look beyond the conventional in order to develop a deeper understanding of human behaviour. ...read more.